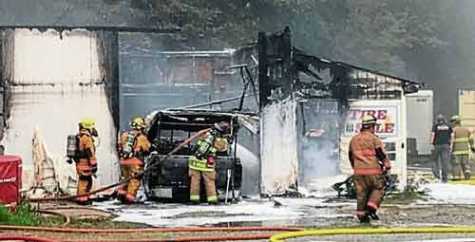 Fire gutted Rain’s Auto Body on Tuesday, Aug. 27 along the 1500 block of Mt. Pleasant Road. Firefighters from 17 departments battled the blaze that was reported at 2:16 p.m. Megan Tomasic, Tribune-Review

The owner of Rain’s Auto Body, Dean Rain, said workers had started welding a car when sparks flew, igniting the fire at about 2:16 p.m. He said workers tried to put the fire out, but “it spread really fast.”

Rain’s Auto Body is on the 1500 block of Mt. Pleasant Road along the border of Unity and Mt. Pleasant townships in Pennsylvania.

Rain opened the business in 1988 and said he plans on rebuilding.

After the fire was out, some walls were left standing, but the building was a total loss, Dryridge fire Chief Rich Levay said. A burned vehicle sat in what appeared to be a bay, while firefighters sprayed foam to put out remaining flames. A “Tire Sale” sign was mostly untouched to the right of the building.

Firefighters from 17 departments, including Unity, Mt. Pleasant, Greensburg, Youngstown and Hempfield and Salem townships were on the scene.

No injuries were reported.

We thank TRIBLIVE for reprint permission.

View the embedded image gallery online at:
https://www.autobodynews.com/index.php/northeastern/item/18338-unity-repair-shop-in-pa-destroyed-by-fire.html#sigProId0d2a8d8580
back to top