Body Shops Prepare as Storms Go on Throughout the Northeast Region

Written by David Hurst, The Tribune-Democrat 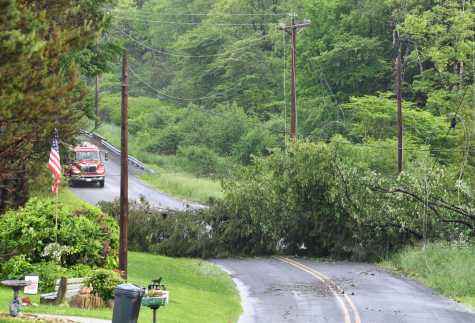 A storm caused a tree to fall across Killen School Road in Barr Township, PA, on Wednesday, May 29. Courtesy of John Rucosky, The Tribune Democrat

Dentworks, which uses equipment to fix dents without harming a vehicle’s finish, responded by bringing in a hail damage repair team from Georgia to assist, he added.

Hollern said the company is also partnering with insurance agencies, including Erie, to get damage corrected.

He said the backlog of repairs should be completed over the next few weeks.

The National Weather Service in Pittsburgh sent a crew to the Penn Run area of Indiana County and was able to confirm a low-level EF-0 tornado touched down there.

No structural damage was reported by the tornado.

But it’s the third twister in the county in a week.

Before this month, only 13 were confirmed in Indiana County in the nearly 70 years prior, National Weather Service officials reported.

A National Weather Service Meteorologist in State College said there were no indications of any tornado activity on the ground in the west-central Pennsylvania territory—Cambria County included—on May 28.

There were several reports further east in the Lancaster area that were being reviewed.

Pennsylvania, on average, records 16 tornadoes a year, and this year’s total is already at 20 through five months.

Tornadoes are rated by speed on a six-level scale and as of May 28, none were higher than an F2 level, Mike Jurewicz, meteorologist, said.

We thank The Tribune-Democrat for reprint permission.

View the embedded image gallery online at:
https://www.autobodynews.com/index.php/northeastern/item/17772-body-shops-prepare-as-storms-go-on-throughout-the-northeast-region.html?start=2#sigProId954f92a722
back to top