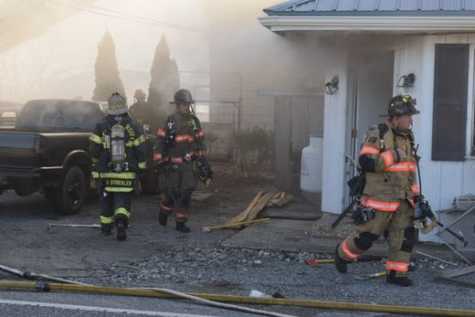 A local fire chief watching his child's soccer game the afternoon of April 1 spotted a fire near a Fawn Township, PA, auto body shop and sprang into action.

Chief Doug Shanberger of Citizens Volunteer Fire Co. of Fawn Grove said he and a friend, a Baltimore County firefighter, were watching the soccer game near the body shop about 4:45 p.m. April 1 when his friend pointed out the fire.

Flames were coming from the back corner of an apartment building on the body shop property at 304 W. Main St.

“We looked over, and that back corner had fire coming out of the corner of the roof," Shanberger said.

The chief called the fire in to York County 911 as he drove to the property.

Shanberger said the wind was blowing the flames toward the body shop.

“Our main goal was to protect the body shop," he said.

Shanberger estimated it took about 40 firefighters from eight fire services about 20 minutes to have the blaze under control. They were on scene for about three hours, he said.

The chief said the situation could have been worse had the body shop caught fire.

"And then of course the body shop would have had plenty of ... flammable stuff," he said.

It was an effort involving departments from three counties. From York County, crews from Stewartstown, Delta-Cardiff, Airville and Felton helped, according to Shanberger.

The chief said it appears an electrical issue or problem with a furnace caused the fire at the apartment building.

Himmel said he was in the process of putting the finishing touches on a new roof at the apartment so the building could be insured. That process would have been done in about three weeks.

His son and brother are staying with him for the time being, he said. His family is taking things step-by-step, he said.

"So far we're getting everything cleaned out," Himmel said.

Himmel thanked the emergency responders for their efforts the afternoon of April 1.

“They got here quick," Himmel said.