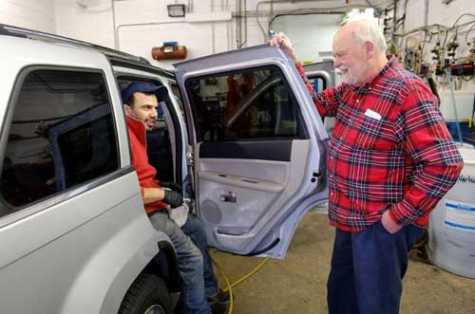 The Hartnett family, which owns the auto shop on 15 Water St., recently sold the business to another family who owns multiple car washes and gas stations in the area.

Alan Hartnett, the oldest of the five Hartnett brothers, said he wanted to retire and initially asked his siblings if they wanted to buy him out. Alan, who is 68 years old, hired a lawyer to begin the paperwork for a potential buyout last November. However, after the brothers could not agree to a buyout deal, the family decided to sell the longtime Danvers auto shop.

“We couldn’t work that part of the deal out so we had to put the entire place on the market,” Alan explained. “It’s not an easy process. We were trying to entertain offers from people in this industry.”

Alan said the new owners of the shop reached out to them and gave them an offer they “couldn’t refuse.” The auto body shop has been a significant place in the community for a very long time, but Alan said selling the place at this point felt like the right time with the right group.

“The easiest exit strategy was to eventually sell to another family,” he said. “It’s in their blood, I guess, kind of the way it’s in our blood.”

Alan said it was important for the Hartnetts to sell the shop to a family who planned to continue at least part of the business.

“I’m happy that there is going to be another car wash here,” he said. “I think that washing cars still has a lot of potential.”

The Hartnett family business was started in Danvers in 1952 by Alan’s father. Then, in 1961, his father bought the current property in Danvers on 15 Water St. All of the Hartnett brothers started working at the business when they were children.

View the embedded image gallery online at:
https://www.autobodynews.com/index.php/northeastern/item/17430-danvers-ma-auto-body-shop-closes-after-almost-70-years.html#sigProIda482bfaca0
back to top