Queens, NY, Woman Discovers How Things Can Go Wrong After a Car Is Stolen 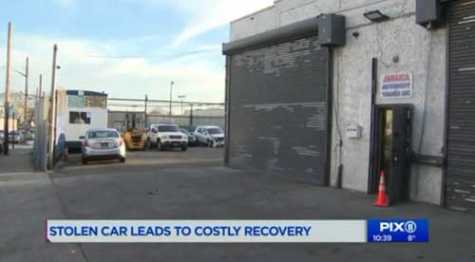 It’s bad enough getting your car stolen in New York---but it got much worse for Lynn Moore, whose 2008 Porsche SUV was taken from the front of her Queens home in mid-January.

About a week after it was stolen, her car was found by the NYPD just a few blocks from her house. However, her troubles were not over. NYPD regulations do not allow the owner of a stolen vehicle to go pick it up from where it was found. Cops are also not allowed to call an NYPD tower and bring the stolen vehicle to a police tow pound.

Instead, the police officer who found the car had to call an NYPD-approved private tower, Jamaica Auto Body and Towing. The company sent a truck to tow the SUV to its lot on 168th Street in Jamaica.

When Moore went to pick up her car at the tower, she learned she had to pay $247 for the towing and storage fees.

Then she took a look at the car and discovered it was badly damaged. The rear bumper was pulling from the car’s body, damage that a GEICO claims adjuster said was likely caused by the towing.

In addition, the exhaust system was making strange sounds. Jamaica Auto Body owner Anthony Giorgianni told Moore the SUV was already damaged when his driver picked it up. But Moore said that's not true. In fact, the cop who found the car filled out a voucher on the scene saying there was no damage to the car.

PIX 11 asked Giogianni about that.

“What am I supposed to do?" he asked. "Not believe what my driver says?"

PIX 11 asked him about the police voucher that said there was no damage.

“Those voucher papers are not always correct," he said. "You’re talking about damages here that are a couple hundred dollars.”

But the claims adjuster for GEICO, Moore's insurer, estimated the cost to repair the damage at $4,388.82.

GEICO is now investigating and Moore has hired an attorney. She believes the tower’s insurance company should pay for the damages. She also said it’s wrong for the city to require someone whose car has been stolen to have to pay the cost of towing when it’s found.

We thank PIX 11 for reprint permission.