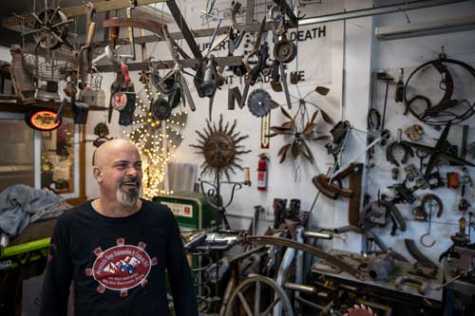 The shop door opened, and proprietor Norm LaRock---who's lean, bald, tattooed and goateed---came outside and shook his hand.

"Hey, Norm," the customer said. "Think you can fix the rockers on my truck this month?"

"Yup, I can get to it," said LaRock in an accent that revealed his native Vermont roots. His long-sleeve T-shirt sported his shop logo above the motto "We ain't rednecks. We are mountain boyz."

After they chatted some, LaRock greeted his other visitor, a reporter, and pointed out some of his metal works around the yard. They included his Toyota Tacoma pickup, which he'd outfitted, incongruously, with dual chrome stacks and metal skulls on the front grill. A rusted-out 2003 Subaru Outback had an equally incongruous snowplow welded on the front end. At the far end of the driveway, which is sandwiched between Vermont Gas and North Country Federal Credit Union on Swift Street, stood a towering brown and tan metal giraffe.

"I like to fabricate things," LaRock explained, heading into his shop. "I do all kinds of stuff."

That much was obvious when we stepped inside. Along with the usual automotive accoutrements--- work benches, tool chests, air compressor, spare tires---the garage contained an entire corner cluttered with hanging pieces of scrap metal and metallic sculptures in various stages of completion.

LaRock pays the bills by sanding rust off Vermonters' weather-beaten rides, but his real passion is fabricating artistic metal creatures. The Burlington-born auto body expert, who has no formal art training, has become a prolific metal sculptor. LaRock's works, which he's exhibited at the South End Art Hop for the past three years, practically sell themselves.

Ask him about his metal creations, and LaRock will happily rattle on about them at the rapid-fire rate of an impact wrench.

View the embedded image gallery online at:
https://www.autobodynews.com/index.php/northeastern/item/16802-car-repairs-and-recycled-art-norm-larock-is-an-auto-master.html#sigProId38b29c812b
back to top