Written by David Bjorkgren, Special to Hellenic News of America and hellenicnews.com 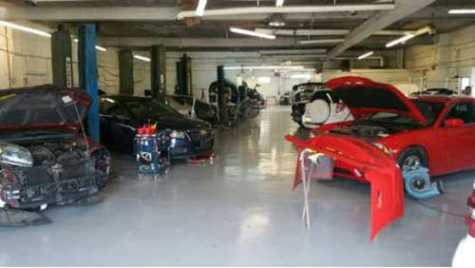 A son made a promise to his dying father: He would take his business and turn it into an empire built on customer satisfaction.

Today, 32-year-old Peter (Pete) Kathopoulis has made good on that promise. What started under his father as a single garage with one part-time employee has turned into a thriving collision repair business. Modern Auto Crafters at 7027 West Chester Pike in Upper Darby, PA, is now considered one of the largest facilities in the area and staffs numerous employees to keep up with production.

And they’re not done yet. Pete is adding on to his facility to make it even larger and is looking to add more locations.

Danny, Pete’s dad, would have been proud.

“I promised him that I was going to grow the business to make it be a successful brand. Even though I didn’t know anything about the business in terms of fixing cars, I knew how to run a business,” Pete said.

Modern Auto’s success continues a 25-year legacy from his father.

Pete took over the business after his father passed away in July 2010. Before he died, his dad and the rest of the family decided which of their family-owned businesses Pete would put his energies into; Modern Auto or Society Hill Pizza at Broad and South streets in South Philadelphia, where his mother worked.

“My mom worked there for 20 years, [working] 18-hour days, so when it was my time to kick in, we stopped that immediately,” Pete said.

In two weeks, Danny taught Pete everything he could about running a body shop. Danny had learned the trade working with Pete’s grandfather at another Upper Darby body shop. He took that experience and opened his own place at 120 Church Ln. in Upper Darby, which would become Modern Auto Crafters.

When Pete took over, business was OK but had room to grow.

“My father was hands-on, loved to do things himself…” he said. That restricted how much expansion could take place.

Pete took a loan from the bank and scouted out the best body shops in the area, convincing their best employees to come work for him. As he hired more employees, Pete also banked on the reputation of his father.

“A lot of people respected him, so we started to get business, not out of pity but out of respect for my father. The Greek community helped kick-start the business,” he said.

They outgrew the Church Lane location, which fit only four cars at a time. They moved to Darby for two years, outgrew that location and settled at their 350-vehicle site on West Chester Pike, where they’ve been for about three years.

Pete grew up in Upper Darby with his mom, dad and sister. His parents married in 1983, both from the small island of Kalymnos in Greece.

There wasn’t much work available on the 10,000-resident island, so they came to the United States looking for better opportunities.

Pete went to St. Alice School, a now-closed private school, then switched to Beverly Hills Middle School in 8th grade before heading to the Haverford School, a private boys’ high school. A love and talent for basketball followed him through school, and he ended up playing point guard for St. Joseph’s University.

“My goal was always to be the best player in the world, make it to the NBA, make millions,” he said. “I gave it all I had.”

Recruiters recognized his talent. He got an offer from Columbia University in New York and other small Division I schools that wanted his talents.

He was on their team for three years but didn’t get to play that much. He started getting calls to play professionally for teams in Italy, Germany and Greece.

In 2008, he was picked up to play point guard for the Iraklis in Greece.

“I’d never been far from home, so it was a little tough,” he said. “There were a few things I didn’t want to leave behind, but I had to do it. It’s something my father and I dreamed of, so it was a goal we did together, regardless of the outcome. Thank God I did it because I would have had a lot of regrets.”

Iraklis placed in the respectable middle during his time on the team.

He was in his third year and about to sign a contract for a fourth season in Athens when his father got sick, so he returned home to take over Modern Auto.

She told him to “be very persistent with making sure the jobs are done correctly and perfectly so the customers keep coming back,” he said. “Our motto is that the customer is the only boss. Without our customers, we’re nothing, so we want to make sure that each car that comes out gets done perfectly. Obviously, we can’t be perfect, but that’s what our standards are---to be as perfect as possible [and] to make sure we’re constantly the best.”

All of Modern Auto’s technicians are certified and trained.

“Everything is top-shelf,” Pete said.

Today, the shop is one of the top body shops on the East Coast in terms of volume of vehicles. The shop works on everything from Porsches to Suzukis.

The latest equipment is used with the best health and safety practices to ensure good work and to protect the workers.

“I want to make sure all of our technicians are safe and do not endanger themselves health-wise. At the end of the day, the goal is to provide for our families, so I do not want anyone getting hurt or sick. We do the best we can,” Pete said.

Modern Auto Crafters won’t take shortcuts, even when some insurance companies want to save money.

“We’re just trying our best for our customers so they can have a better vehicle once it’s completed,” Pete said.

Today, Pete is “married to his beautiful wife and has amazing twin girls [who are] 19 months old.” He remains a member of St. Luke GOC in Broomall and also St. Demetrios in Upper Darby. He is also a member of AHEPA 445 in Upper Darby.

He’s grateful to those who have helped his business be successful, especially to Upper Darby Township and Upper Darby police, who supported Modern Auto from the beginning when it started to expand.

“We’re happy to be a part of the Upper Darby community, making it grow,” he said. “I am very fortunate to have such a good staff, especially our management team. [I am] also very grateful for all the people who refer business to our facility.”

He extended an obvious thank you to his mom and dad.

“My only regret is that I wish my dad could be here to see the whole empire we’ve built,” Pete said.

He is grateful to his mom, who “constantly pushes and is very adamant on our motto that customer service is the only thing that makes this business succeed. Without her, there would be no Modern.”

His words of advice for the younger generation?

“Don’t be scared to strive for greatness,” he said. “There’s nothing unattainable if you come with a focused mind and a hungry heart; you will achieve whatever you want.”

We thank Hellenic News of America and hellenicnews.com for reprint permission.

View the embedded image gallery online at:
https://www.autobodynews.com/index.php/northeastern/item/16763-young-greek-american-builds-body-shop-empire-in-upper-darby-pa.html?showall=1#sigProId3b903e5ba9
back to top