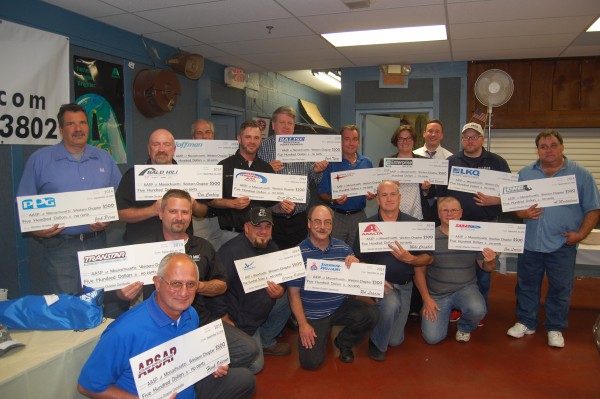 On Friday, September 26, the Western Chapter of AASP-MA held their Annual Clambake at the Polish-American Club in Feeding Hills. Featuring delicious food, amazing raffle prizes and a fun evening of networking, it’s no surprise that the clambake was a sold-out event with over 240 attendees in the 250-person capacity hall.

Attendees began their evening by enjoying a delectable dinner of clam chowder, steamed clams and a complete barbeque chicken dinner. Everyone was enthusiastically buying raffle tickets to gain the chance to win one of over 100 prizes, donated by the many companies that sponsored the event. Prizes included various gift cards, tools, clothes, sporting goods, and more. The Grand Prize, once again donated by Chris DiMarzio of Linder’s, Inc., was an iPad with a Bluetooth Keyboard.  The first prizes offered were an iPad, donated by LKQ, and a 40” RCA LED television, donated by Auto Craft Sales, a Division of BAPS Auto Paints & Supply.The Western Chapter of AASP-MA is grateful to all of their sponsors for their support, calling them “the best vendors in the country.” There were 16 gold sponsors for the event, including Amherst Oakham Auto Recycling, Astro Automotive, Auto Body Supplies and Paint, AkzoNobel, Axalta, Bald Hill Dodge Chrysler Jeep & Kia, Balise Wholesale Parts Express, Enterprise Rent-A-Car, Hoffman, LKQ, Long Automotive Group, PPG, SARAT Ford Lincoln, Sherwin-Williams Automotive, Transtar Autobody Technologies, and West Springfield Auto Parts. Each gold sponsor presented oversized checks to the event planning committee.

The silver sponsors for the Clambake were Artioli Chrysler Dodge, Auto Craft Sales, a Division of BAPS Auto Paints & Supply, Jim Busiere of CCC-IS, Empire Auto Parts and Marcotte Ford, while Central Chevrolet, Lia Honda of Enfield, Mirka Abrasives and Tasca Automotive all support AASP-MA’s Western Chapter as bronze sponsors. AASP-MA receives a lot of support from their local vendors and encourages their members to patronize these companies whenever possible.

A highlight of the evening for the shop owners in attendance was a special drawing for some special prizes ranging from live I-CAR classes to a Dell Tablet, donated by Jim Busiere of CCC-IS, to Celtics tickets,  donated by Autopart International.  Statewide Director Don Cushing of Bald Hill Dodge Chrysler Jeep & KIA was quite popular all evening as he drew names to announce the winners of each amazing prize.

During the 2014 Clambake, AASP-MA’s Western Chapter also raised funds by selling beer tickets and through their 50/25/25 cash raffle with 50% of the proceeds going to the association and the remainder of the pot being divided between two winners.Of course, any association event is about more than good food and prizes; the real draw is the opportunity it provides for an evening of networking with industry peers. Joann Nalewanski, a member of the association’s Western Chapter, notes, “since MA has the lowest labor rate in the country, it’s tough out there; it’s nice to get together and share a sense of camaraderie. There’s really a sense of family in our Western Chapter; it’s just a great group of people! For example, Mike Beal was the president of our chapter for 20 years, and though he retired in 2013, he joined the planning committee again this year. On Friday morning he was in the hospital, was discharged at noon and at the clambake by 5PM. Everyone is truly committed to the association and its goals.”

On Saturday, November 15, AASP-MA will hold their 7th Annual Private Casino Night at Gillette Stadium in Foxboro, MA. The event, sponsored by Enterprise Rent-A-Car, will feature gaming and prizes as well as a stadium tour. The cost for members is $100 without the tour while non-members pay $225; the tour is an additional $25.