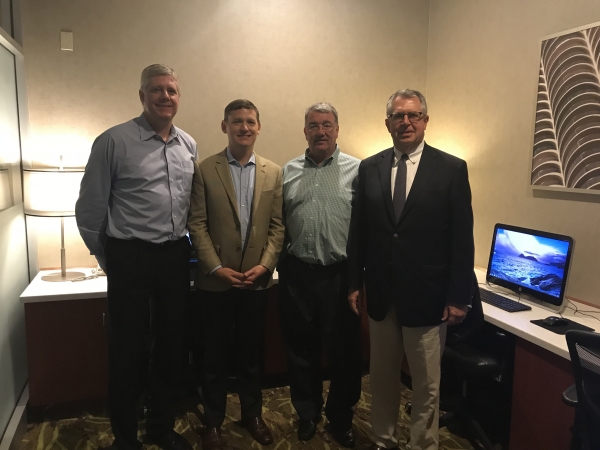 On Wednesday, Oct. 25, ASA-MA/RI brought Las Vegas to Massachusetts when the association previewed the Technology and Telematics Forum 5.0 that was scheduled to be presented at SEMA on Nov. 2.

The three-hour meeting was held at the Holiday Inn in Taunton, MA.

ASA-MA/RI Executive Director Stephen Regan shared, "The event was well-attended, and there was a lot of great interaction between attendees and the presenters. It was better than I expected. Every meeting runs some risk of not living up to its billing. This meeting was great in every aspect. From the location to the physical room, to the speakers and the interaction with the audience, it was a clear success."

ASA National President Dan Risley opened the meeting with an overview of ASA and its offerings, as well as a discussion of the association's importance to the collision repair industry. Risley also discussed the benefits of ASA memberships and detailed some of its current initiatives.

Next, Regan shared ASA-MA/RI's intention to host an increased number of local meetings in an effort to improve focus on local issues. The affiliate chapter will be monitoring state legislative and regulatory efforts locally as part of its up-close and hands-on approach to member services. Finally, Regan announced that ASA-MA/RI has opened a local office, which will be staffed Monday through Friday during normal business hours.

Regan then introduced Robert Redding, ASA Washington DC Representative, and Wayne Weikle, Senior Director for the Alliance of Automobile Manufacturers, who held a lively discussion on automated vehicle technology legislation currently working its way through Congress. They also provided information on some state legislation that has been receiving attention.

Regan recalled, "They discussed one successful recent effort by ASA to get an amendment to automated vehicle legislation that has passed the House and a key Senate committee. The amendment establishes a federal advisory committee comprising aftermarket representatives and other stakeholders. The committee will work with NHTSA and the Federal Trade Commission (FTC) to produce a report on vehicle data access, intellectual property protections, customer privacy, cybersecurity and vehicle safety."

The final speaker of the evening was Robert Oulton, Market Area Product Specialist for General Motors, who detailed some new vehicle technologies and the challenges these present to the collision repair industry.

According to Regan, "Many of the attendees' concerns surrounded proper repair procedures and access to correct repair information. For over two hours, Bob and the audience went back and forth in lively discussion about the operations and specifications of many new vehicle technologies."

Regan stated, "Association-sponsored meetings are a great source of information and an opportunity to network with colleagues. When I ask shop [owners] who were once association members why they left, a common response was a lack of membership meetings. These meetings also offer our business partners an opportunity to interact directly with their customers outside of the shop environment."