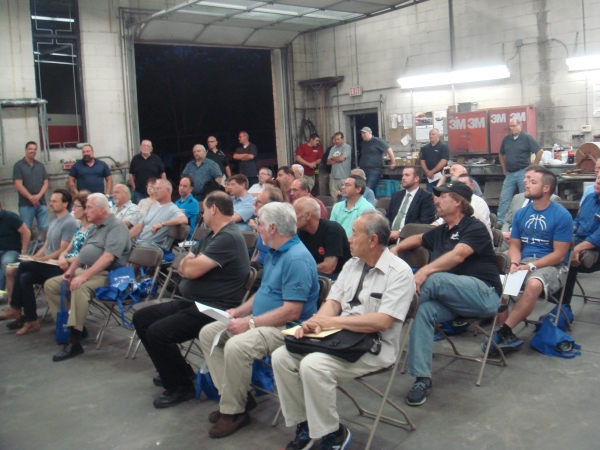 At 8PM, LIABRA Executive Director Ed Kizenberger began the meeting by distributing Regulation 64 reference guides and an insurance department letter regarding caps on the cost of paint and materials. Addressing the problems associated with third party claims, if a problem presents itself, Kizenberger advised association members to encourage clients to file first party claims whenever it’s possible. Emphasizing the importance of being the designated representative on first party claims, Kizenberger reviewed the section of Regulation 64 that requires insurers to leave a worksheet or a copy of their estimate with the designed representative or insured within 24 hours following their inspection.

Regulation 64 requires the insurer to inspect first party damage within six business days, and if they fail to adhere to this requirement, the insurer forfeits the right to an inspection, allowing the repair facility to proceed with the repair and, upon completion, submit an itemized bill to the insurance company. After answering attendees’ questions, Kizenberger concluded his presentation by informing his audience that the insurer has 48 hours to inspect additional damage in the event of second inspections in supplements. ABCG Executive Director Ed Kizenberger Jr says, “This was a very interesting and informative discussion, and it was very well received by the members of both associations.”

The 250 Club Drawing then commenced with 250 raffle tickets being drawn; the 50th, 100th, 150th and 200th tickets received $500, while the last ticket drawn won the grand prize of $8500. The recipients of the $500 prizes were Master Collision Rockville Center, Joe from Coach Auto Body Syossett, Third General Auto Body, and Apple Honda Riverhead. The Grand Prize was won by Bob D’urso of Bob’s Auto Body in Lynbrook.

Kizenberger says, “Congrats to all the winners. LIABRA would like to thank all the members and supporters who participated in the drawing. The proceeds of the drawing help to support the ongoing operation of your association and especially our lobbying efforts in Albany. LIABRA would also like to thank Greg and Scott Smith for the use of their beautiful facility and Enterprise Auto Rental for providing the pizza and refreshments, as well as Dennis Schroeder, Parts Manager at Donaldson Volkswagen, for the goodie bags filled with shirts, hats, pens and pencils.”

LIABRA will take a break for the summer with no general meetings being held in July or August. The association will hold its Annual Golf Tournament at the Baiting Hollow Country Club on September 26. For more information about the golf tournament, contact Golf Committee Chairman Paul O’Connell at 516-524-2353.