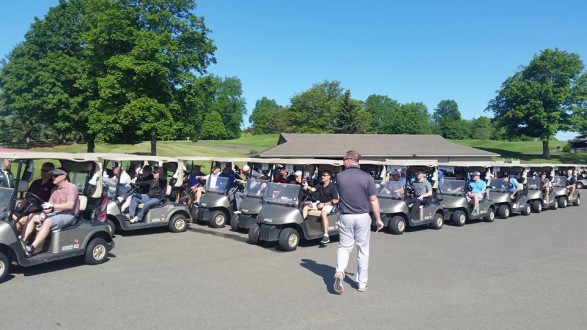 ASA-CT Executive Director Lisa Siembab states, “Based on the generosity of our golfers and sponsors, we raised $6000 for the Explorer’s Program which is designed to recruit and train young men and women as first responders.”

Each year, ASA-CT’s Annual Golf Outing serves as a fundraiser for a local charity, and in 2017, the association chose the Explorer’s Program which is managed by Wallingford Volunteer Fire Station #7. Siembab notes, “We are honored to have an opportunity to help this wonderful program in just a small way.”

Wallingford Volunteer Fire Station #7 consists of 36 members staffing a pumper, heavy rescue and tanker, and the station also provides rescue, EMS and HAZMAT services to the citizens of Wallingford, CT.

The Explorer’s Program is a large focus for the station and attracts male and female candidates as young as 14 years old. The Program is overseen by Chief Timothy Wall who explains, “This is our way of planning for the future – we must make parents and kids aware of the opportunities as a firefighter and first responder, but it begins early.”

ASA-CT’s 2017 Golf Outing included several fun contests in addition to the golf tournament itself. “Get Your Gear On” provided an opportunity for golfers to compete for the best time putting on firefighters’ gear, with the goal being 45 seconds, in exchange for a small donation, and the tournament also featured a Golf Ball Drop from a fire truck.

View the embedded image gallery online at:
https://www.autobodynews.com/index.php/ne/item/13384-asa-ct-s-2017-golf-outing-benefits-volunteer-firefighters.html#sigProId8e3a593fcd
back to top