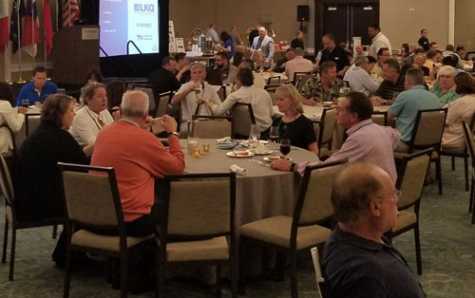 Attendance at the ABPA’s 2019 Convention was at an all-time high. Chasidy Rae Sisk

According to Edward T. Salamy, executive director of ABPA, “The event went extremely well and exceeded our expectations. Attendance was at an all-time high.”

In addition to a plethora of educational opportunities, the annual convention included a golf tournament, networking opportunities and plenty of fun for all attendees.

“The response from attendees was overwhelmingly positive,” Salamy added. “On our post-convention survey, we ask if they felt the ABPA meeting was a valuable experience, and all respondents thus far have answered ‘yes’.”

ABPA’s 2019 Convention began on April 30 with a welcoming reception. The golf tournament took place on April 31 at the Jacaranda Golf Course in nearby Plantation, FL. Before dinner, the ABPA proudly partnered with the National Auto Body Council (NABC) to participate in the Recycled Rides program for the third year. “Once again, the event did not disappoint,” Salamy said. “A disabled veteran was the recipient of this year’s vehicle—a 2017 Volkswagen Passat Sport.”

Sessions on April 1 concluded with cocktails followed by the tradeshow dinner.

A panel full of leaders held educational breakout sessions on Thursday, April 2. Presentations were made by the following: Ray Colas of LQK, Peter Quinter from GrayRobinson, Hartford Insurance’s Greg Horn and Bill Langley of CCC. During the awards lunch, the association honored three recipients with industry awards: Intertek, Clark Plucinski of CREF and Mike Chiu of National Auto Body Parts. The President’s Award was presented to Jeff Chen of TYG. The Chairman’s Award went to New World’s Joseph Tsai.

After lunch, breakout sessions were hosted by Intertek, NSF, PartsTrader and CCC. Attendees concluded the evening with networking at the event’s cocktail and dinner event.

On the final day of the conference, Friday, May 3, speakers lead sessions on various industry topics. Speakers included: I-CAR’s Jason Bartanen, Jeff Schroder of car-part.com and Danny Morris from Dentons. “The last day of the ABPA convention was only a half day, but we packed in some tremendous speakers so we would go out on a high note! Those who left early on Friday morning truly missed out. After the last speaker, Chris Northup, ABPA chairman, called an end to the meeting, which closed out the most successful ABPA convention in years,” Salamy said.

The ABPA holds its annual convention in order to provide ABPA members with the “opportunity to meet with each other, make new connections and discuss important relevant industry topics,” Salamy said. “If you are a distributor or manufacturer of aftermarket collision parts, you need to be at this event.”

View the embedded image gallery online at:
https://www.autobodynews.com/index.php/national-associations-news/item/17715-abpa-annual-convention-remains-successful.html?showall=1&start=0#sigProIda275cb30cd
More in this category: « ABPA Voices Concern to Introduction of State Bills ABPA Concerned About OE Repair Procedures Bills »
back to top