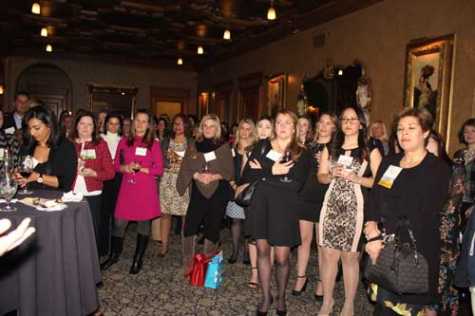 On Dec. 5, the Automotive Women’s Alliance Foundation (AWAF) hosted its 2018 Holiday Event at the prestigious Whitney Mansion in Detroit, MI, one of the city’s most beautiful and historic venues.

Sherry Muir Irwin, member of AWAF’s board of directors, noted, “It was a wonderful evening celebrating the culmination of another successful year for AWAF! The Whitney, all decked out in its holiday finery, provided a festive backdrop for AWAF’s sold-out signature year-end event. The evening began with the 125+ AWAF members and their guests enjoying delicious hors d’oeuvres and holiday cheer while mingling with fellow automotive professionals and friends. It was a wonderful conclusion to a great year!”

The evening’s featured speaker was Joe Hinrichs, executive vice president and president of global operations for Ford Motor Company. He shared some of the insights and wisdom he’s gained during his extensive automotive industry career.

“With one of his daughters now pursuing an automotive career, he has gained a new appreciation for the challenges faced by women in the industry and encourages us to speak up and use challenging situations as teachable moments,” Irwin recounted. “He’s told his daughter that ‘you either teach or tolerate’ when faced with negative circumstances and behavior---and encouraged us all to be teachers!”

Next, Jane Bishop, co-chair of AWAF’s Scholarship Committee, announced the five deserving recipients of AWAF’s final 2018 scholarships. All of the recipients are pursuing undergraduate degrees in preparation for automotive industry careers. The scholarships were sponsored by Deloitte, Magna International, Adient, AWAF and the Elder Automotive Group’s scholarship in memory of Irma Elder, who was the matriarch of the Elder Automotive Group, one of the first female auto dealers, and a long-time supporter of AWAF.

Irwin noted, “With these five scholarships, AWAF is nearing the half-a-million-dollar mark in scholarships awarded since 2001.”

AWAF’s outgoing president, Linda Taliaferro, then announced the association’s 2019 board of directors, which included incoming President Susan Rokosz of Ford Motor Company, who has served on AWAF’s board since 2012. Taliaferro also announced the creation of a new VP of STEM office position as part of AWAF’s increased focus on STEM, a role that will be filled by Cathy Koch of K-Tec Systems, Inc.