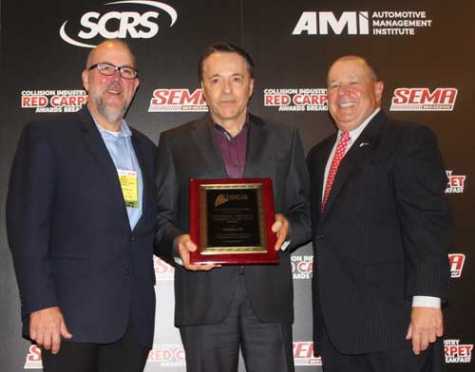 (L to R) Clint Marlow, director at Allstate and CIECA's chairman of the board; Pete Tagliapietra, NuGen IT, who accepted the award on behalf of the company; and Fred Iantorno, CIECA's executive director.

Held during the SEMA Show in Las Vegas, NV, the awards ceremony provided the opportunity for industry organizations to recognize the outstanding leadership, dedication and commitment of individuals and businesses in the industry.

“CIECA is really proud this morning to recognize four individuals and one company for their exceptional efforts,” said Clint Marlow, director at Allstate Insurance and CIECA’s chairman of the board.

“An integral contributor to the CIECA standard, Andy was primarily focused on mobile data standards,” said Marlow. “He single-handedly developed a process in which CIECA transforms our BMS message suite to the messages that mobile devices support, ensuring that our BMS works on future mobile devices.”

“Joanna has been a long-time contributor to the development of CIECA standards,” said Marlow. “She has been focused primarily on procurement and estimating messages.”

Cohen recently spoke at the annual CIECA Symposium and held a CIECAst webinar about updating estimates with alternate parts.

The first was Leslie Redfield from Genpact. After a short time of being involved with the Photo Estimating Committee, Marlow said Redfield led the message development---particularly the message that identifies the estimate as being created from a photo.

“That enables all parties involved to track which estimates or supplements are getting created from one source,” explained Marlow.

“His efforts as a contributor really helped the work that was done, which now includes multiple BMS messages from assignment to repair order where the scanning information can be included,” said Marlow. “He never missed a meeting and always kept the committee focused.”

Marlow said Amberson also supported the ease of the implementation and is an extremely valuable member of CIECA and the industry.