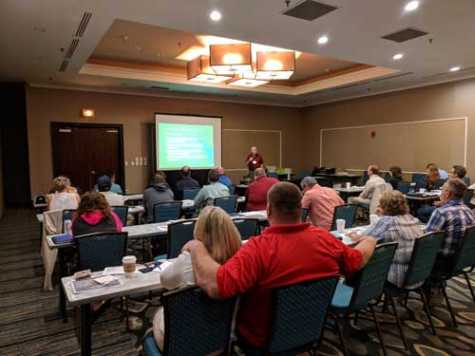 On Sept. 28 and 29, the Coalition for Collision Repair Excellence (CCRE) held its Fall Seminar and Convention at the Embassy Suites at the Atlanta Airport.

According to CCRE President Tony Lombardozzi, “Attendees hailed from all parts of the country, including Utah and Alaska. The room held a full house of eager-to-learn collision repair shop owners and other guests who wanted to learn another way of conducting business in our industry. Many of them have realized that the present system is not working and is not a profitable method of operation.”

The weekend commenced with Lombardozzi’s opening introduction, followed by a presentation on how the industry ended up in its current condition, where it is today and where it is headed in the future.

He shared, “We spent a great deal of time discussing how we let go of the control of our industry and how we let insurers into the repair process.”

Lombardozzi’s “An Educational and Networking Experience with Industry Peers” began by focusing on who CCRE is, how it has influenced the industry and what its future plans will entail. Future plans include development of state-by-state programs to develop a systematic resolution of day-to-day business issues, a network of attorneys for assistance in business-related situations and consumer issues, continued educational opportunities for shops and the teaching of the importance of documentation as the group strives for collision repair excellence and the right to operate as independent business owners without being influenced by a third-party entity.

The presentation then continued to explain that the industry fell into this state through apathy, poor business management skills, inappropriate behavior, insurers’ influence and the industry’s poor image. Lombardozzi emphasized that the correct alignment of contracts is a repair shop having a contract with the vehicle owner while the vehicle owner has a contract with the insurance company. When the contractual relationships become a “terrible triangle,” the repairer loses.