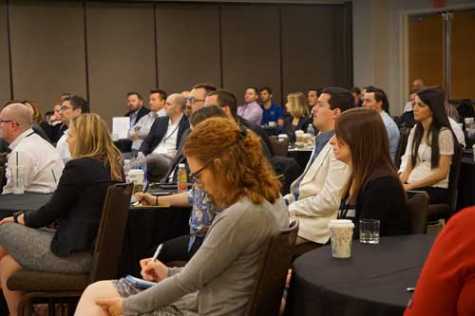 YANG’s 2018 Leadership Conference attracted many attendees who rated this year’s event the best to date.

The Young Auto Care Network Group (YANG) hosted its 2018 Leadership Conference at the Atlanta Marriott Marquis in Atlanta, GA, on May 11--12 in conjunction with the Auto Care Association’s Spring Leadership Days.

According to YANG Liaison and ACA Manager of Government Affairs David Pinkham, “The event went incredibly well. It was our most well-attended and highest-rated Leadership Conference to date. We wanted to ramp up the content this year and provide an effective balance of industry education and professional development, both of which were accomplished.”

“Auto Care staff and the YANG Advisory Council were in agreement that this event blew our expectations out of the water,” said JC Washbish, director of marketing for the Aftermarket Auto Parts Alliance and YANG vice chair.  “It was a fast-paced day and a day of engaging speakers with content that would be relevant to any young, driven professional. The networking opportunities also provided attendees a chance to make connections and talk about their experiences in the industry.

“The Auto Care Association prides itself on being able to bring professionals from across all sectors together to network and conduct important business. YANG’s events, especially the YANG Leadership Conference, are a great example of not only being able to bring people together, but putting them in a position to learn from one another and broaden their view of the industry. The vast majority of Leadership Conference attendees we surveyed found the event to be both enjoyable and worth their while.”

The conference began on May 11 at 1 p.m. with a Welcome Address, followed by a keynote presentation titled “The Master of the Tornado” by Michael Hoffman, president of Igniting Performance. Next, Amy Antenora, editor of aftermarketNews, discussed “Our Industry: A Year in Review.” Afterward, Jim Dykstra, CEO of Dytech Auto Group, covered “Future Trends: The Next Big Industry Issues.” After a brief networking break, attendees participated in a Communicating with Influence workshop. The day ended with an ACPAC Reception and dinner.

Saturday’s sessions began with a Rapid Fire Session and Round Table Discussions, which were led by five conference attendees. After a networking break, Ryan Jenkins discussed “Next Generation Leadership: Keys to Working Across a Multi-Generational Workforce” before the conference concluded with “How To Be a Leader,” presented by Scott LeProhon, executive vice president of Global Procurement for Genuine Parts Company.

“The purpose of the Leadership Conference was to offer quality leadership training and networking to the auto care industry’s top under [age]-40 performers, and we feel we met the goal,” Pinkham said. “YANG hopes to build off this year’s success and host a conference next year that surpasses this one. We’ve officially raised the bar so the pressure is on to keep the content fresh and exciting.”