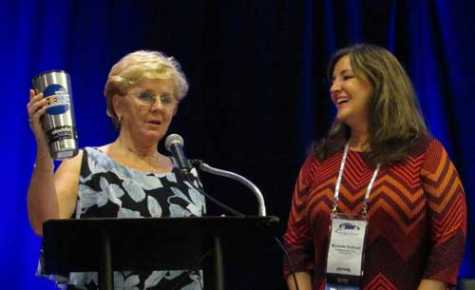 The Women’s Industry Network (WIN®) gathered at the Hyatt Regency in Indianapolis, IN, from May 7--9 for the association’s 2018 Educational Conference: Racing to Connect.

The conference began on Monday morning with a Welcome Reception while two new member orientation sessions were held. This year’s emcees, Blair Womble and Amanda Seyler, kicked things off at 1 p.m. with the Opening General Session, during which they covered the conference agenda, took care of housekeeping items and read the antitrust guidelines.

WIN Chair Petra Schroeder provided the WIN Welcome, during which she acknowledged the WIN founders, past Chairs, former MIWs and committee members, shared the history of WIN, announced the 2018 scholarship winners and discussed the progress made on the association’s strategic goals, such as piloting three regional events in 2017. She also shared WIN’s strategy for 2018—2020, which includes reviewing the group’s mission and vision as it strives to strengthen the network, resource the industry and expand its capacity based on the four pillars of member development, member benefits and programs, industry relations, and communications and operations.

Schroeder also announced that three board members would be departing and thanked Jessica Rob, Melissa Miller and Shellie Andrews for their service to WIN. Turning to WIN’s 2018--2019 Executive Committee, she announced that Kathy Coffey would be secretary, Cheryl Boswell would be treasurer and Jenny Anderson would serve as vice chair. As Schroeder moves into the role of Immediate Past Chair, WIN has elected Michelle Sullivan as Chair. After recognizing the platinum and gold sponsors for the event, Schroeder ended her talk by providing some tips for a successful conference.

Monday afternoon’s seminar was titled “Why of You?” and presented by Dr. Eric Goldstein from the Paul Hertz Group.

Goldstein explained, “You’re here to become more personally aware and strengthen your relationships. People with talent hit a ceiling even though they’re capable of more, so that gets in the way. Research has led us to the discovery of shadow behavior, an automatic behavior that is often exaggerated and inappropriate, which masks your talents and strengths, damages relationships, stifles teamwork and hurts productivity.”