CCRE Teaches SARC Attendees to Think Differently About Their Businesses 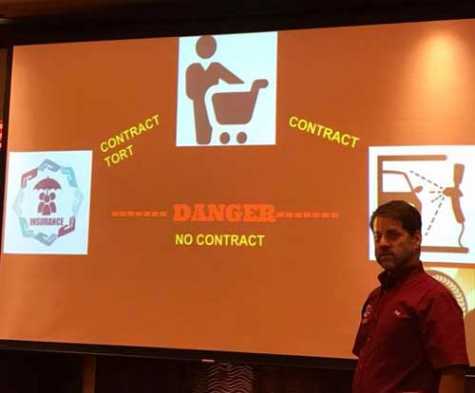 Jeff Bryant presented "Autosport Testimony and Customer Expectations" and "Paint and Material Invoicing" as part of CCRE's "Thinking Differently About Your Business” seminar in Biloxi, MS

On the morning of April 20, the Coalition for Collision Repair Excellence (CCRE) presented an educational seminar, “Thinking Differently About Your Business,” during the Southern Automotive Repair Conference (SARC) in Biloxi, MS.

The morning consisted of three sessions: Introduction to CCRE, Operating Independently and the True Value of Services. The seminar attracted around 40 attendees who were eager to learn a new perspective on how they run their shops.

The seminar began with CCRE President Tony Lombardozzi’s “Introduction to CCRE: How Did We Get Here? Where Do We Go From Here?”

Starting by discussing third-party intrusion, Lombardozzi noted, “Insurers have more control in our business now than ever. How did we allow this to happen? What can we do now to undo the problem? It begins with different ways of looking at the estimating process.”

Lombardozzi discussed the value of educating the customer on the repair process, understanding mutual obligations and meeting these expectations. He also shared suggestions on what documentation is necessary for shops to obtain.

Turning to estimating, Lombardozzi explained how it was done in “the early years” when labor prices were quoted based on experience, parts prices were obtained from the local dealer and when it came to scheduling, “all that was needed was a handshake.” In the late 1950s, Glen Mitchell released the first Part Number Service, the guide that eventually became a “control mechanism.” Things seemed to improve when shop owners met with the U. S. Attorney General and the 1963 Consent Decree was signed; however, in the late 1960s and early 1970s, Part Number Guides were renamed Collision Estimating Guides, refocusing attention on estimating and leading the guides to become the new standard.

Throughout the 1970s, insurer control increased, the guide became the Bible and insurers began to use the guide against shops, introducing new terminology.

According to Lombardozzi, “They taught us their language. We don’t handle claims---we repair vehicles! ‘Supplement’ is an addendum to an improperly written estimate by the insurer. Why use an insurer’s estimate as the basis for a repair when they did nothing to prepare the estimate correctly? It’s not the shop’s supplement; it’s the insurer’s supplement. If the shop is preparing a supplement on behalf of an insurer, the proper service fee should be billed as a line item, but shops don’t bill for supplements. We need to stop doing the insurance company’s job!”