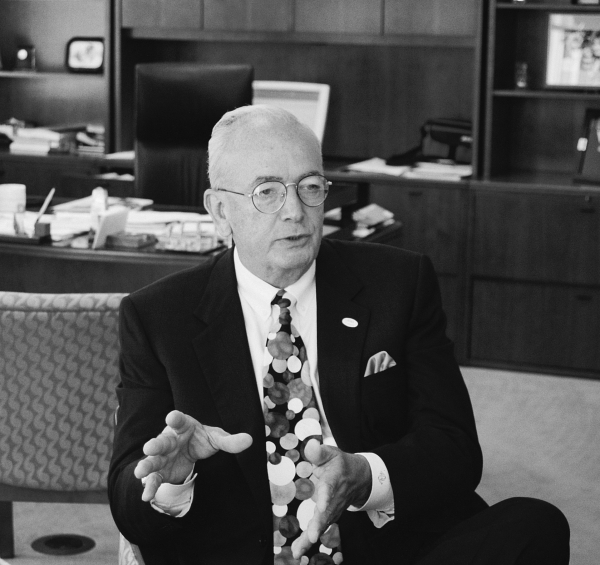 Al Gaspar, industry icon and former president and CEO of the Automotive Aftermarket Industry Association (AAIA), passed away at his home in Cave Creek, AZ, on Saturday, Nov. 25, 2017.

"Al was one of the most respected and revered individuals in the business," said Bill Hanvey, president and CEO, Auto Care Association. "When Al walked into a meeting room, you knew it---he had a presence that commanded attention."

Prior to becoming president and CEO of AAIA (now the Auto Care Association) in 2000, he was president of the Automotive Parts and Accessories Association (APAA) for five years following an unprecedented three terms as Chairman of the Board of APAA. Previous aftermarket positions included executive vice president of McKay Chemical Company (a division of Blue Coral); vice president, consumer sales for Wynn Oil Company; and vice president, sales and marketing worldwide operations, Bardahl Manufacturing Corporation.

Among a number of milestone successes during Gaspar's more than 40-year career in the industry, two key achievements during his term as AAIA president were widely applauded. He spearheaded an ambitious fundraising campaign to build the $5 million state-of-the-art Aftermarket Education Center building at Northwood University in Midland, MI, and led several member companies in raising funds to research the viability of consumer education as a solution to capture a share of the $70 billion in unperformed vehicle maintenance, which validated the need for and creation of the Be Car Care Aware consumer education campaign.

His commitment to the industry began as a marketing student at San Jose College in California. As an undergraduate student, he served as national president of Distributive Education Clubs of America (DECA), a national foundation to encourage high school and college students to pursue degrees in marketing and merchandising. Upon graduation, he began a 14-year career with Standard Oil Corporation in San Francisco, CA.

Gaspar was a recipient of numerous recognitions, including the Distinguished Service Citation from the Automotive Hall of Fame and AAIA Aftermarket Executive of the Year. He served on a number of committees and boards, including the board of trustees of the Automotive Foundation for the Aftermarket and vice president of the board for the Coalition for Auto Repair Equality (CARE).

Donations in Gaspar’s name can be made to the University of the Aftermarket Foundation.

View the embedded image gallery online at:
https://www.autobodynews.com/index.php/national-associations-news/item/14337-industry-icon-al-gaspar-passes-away.html#sigProIddfe8091887
More in this category: « Vehicle Scans and the CIECA BMS AWDA Announces New Leadership With Three Officer Appointments »
back to top