NABC Recycled Rides Program Aims to Change and Save Lives 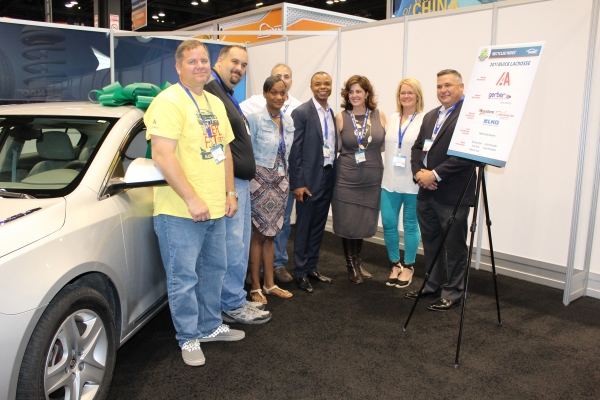 Devan Evans received a 2011 Buick LaCrosse during the event and said the vehicle will enable her to have reliable transportation for her family.

When Victoria Adams’ life took a turn for the worst, she lost everything---her job, her home and her vehicle.

“I was devastated,” said Adams. “Sometimes, we go through struggles and tragedies. Some people give up because they don’t think there are opportunities out there anymore. I was one of those people.”

She reached out to Family Promise for shelter and support. In addition to helping her regain control of her life, the nonprofit organization also nominated Adams to receive a restored vehicle as part of the National Auto Body Council’s (NABC) Recycled Rides program. That was two years ago.

“These wonderful people working for these programs have made a positive and influential difference in my life,” she said. “They gave me and my child a better opportunity to grow.”

“We gather together as a team with one goal---to improve the life of an individual and their family,” said Linda Sulkala, NABC Recycled Rides program manager.

During the NACE Automechanika tradeshow held in Chicago, IL, in July, NABC presented four recipients with vehicles as part of Recycled Rides.

This year, NABC’s goal is to donate 300 vehicles across the country, including one in every state. NABC also partners with 1-800 Charity Cars, which donates its services to process the paperwork to transfer the vehicle title from the donor to the recipient.

“All of us together have taken a vehicle that once upon a time was unable to be repaired simply because it cost too much,” said Chuck Sulkala, executive director of NABC. “By donating services and products, we have now made that cost very minimal and returned the vehicle back to its quality of life so somebody could have good use of it and get back on their main stream of life.”

Dominic Brusco, chairman of NABC, said that what NABC does and why it does it changes and saves lives.

“We want to help people who are less fortunate,” Brusco said. “It makes us feel good and it does truly change the world.”

The first two recipients announced during NACE Automechanika were nominated by Catholic Charities of the Archdiocese of Chicago’s Supportive Services for Veterans’ Families (SSVF), and introduced by the organization’s case manager, Debra Johnson.

A service veteran who toured in Iraq and Afghanistan, Evans has received numerous awards. In 2016, she attended college majoring in early childhood education while working part-time. The challenges of being a single mother on a minimal income resulted in the loss of her vehicle. She was homeless when she entered the SSVF program in 2016, run by Catholic Charities of the Archdiocese of Chicago. She now has a steady job and was recently promoted. Evans said the vehicle will enable her to have reliable transportation and support her family’s needs. “Everybody goes through difficult times, but you just have to keep your head up and keep moving,” she said.

Walk, also a service veteran, began boot camp in 1990 and trained as a jet engine mechanic. She was one of only a few women who repaired jet engines at that time. After an honorable discharge in 1993, Walk earned an associate degree in accounting. She worked in various accounting positions before returning to Chicago to care for her ill mother. In 2017, Walk lost her job and ultimately her car after being involved in an accident. She joined the SSVF program and started working at Edward Hines Jr. Veteran’s Administration Hospital while regaining her mobility. “No longer will I have to ride the bus. To be given this car is a great honor and privilege,” said Walk. “I am exceptionally blessed and fortunate.”

Taylor was living in the Family Promise shelter program with her daughter and grandson. Her daughter had a very long work schedule and commute every day, so Taylor took her grandson to school and other activities on the bus. It took more than an hour each way before going to work herself. “Having a car is probably going to cut my time by more than half, and that will help us have more of a normal life,” she said. “It will make my life and the life of my grandchild and my daughter much better. I’m very appreciative of everyone who was able to make this possible.”

Fomond and her family were sleeping in a van when they learned of the Family Promise program. She and her daughter were taking the bus with her three grandchildren. A typical day involved taking multiple buses to drop off the kids at different places and then go to work. “With this car to get around, it will be so much easier now,” said Fomond. “Thank you to everyone who participated in making this possible for me, my grandkids and my daughter.”

To become a member of NABC and find out more information about the Recycled Rides program, contact: info@nationalautobodycouncil.org  or visit NationalAutoBodyCouncil.org.