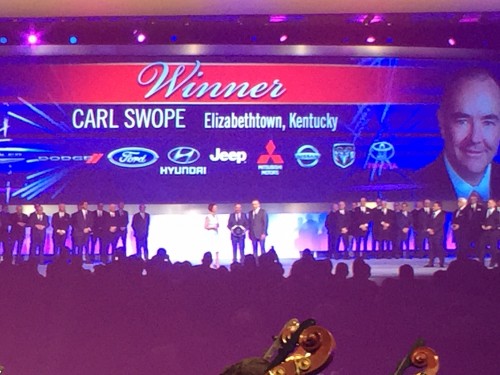 Celebrating its 100th anniversary, the National Automobile Dealers Association (NADA) kicked off a series of yearlong commemorative events at its annual convention and expo in New Orleans, Louisiana on January 26 to 29.

This is the 12th time since 1973 that the convention has been held in “The Big Easy.” An estimated 23,000 new car dealers, managers, automotive industry professionals and exhibitors were expected to attend the four-day event.

"It's not every day that a national trade association reaches its 100-year anniversary, yet NADA is still as strong and relevant as the day it was founded," said 2016 NADA Chairman Jeff Carlson.

"NADA's 100th mission for 100 years has been to represent local dealerships and our customers in Washington, D.C., with a goal of keeping personal transportation affordable for everyone,” added Carlson, president of Glenwood Springs Ford and Glenwood Springs Subaru in Glenwood Springs, CO, and co-owner of Summit Ford in Silverthorne, CO. “It's an honor to serve such a respected group.”

Founded in 1917, NADA formed when a group of local dealers set out to fight a new effort by Congress to levy a luxury tax on new automobiles. Thirty dealers from state and local associations traveled to Washington, D.C., and set up base at the Willard Hotel. By convincing Congress that cars were not luxury items as they were classified, but instead were vital to the economy, the group prevented total factory conversion to wartime work and succeeded in reducing a proposed five percent luxury tax to three percent.

The incident was the first of many chapters where local dealerships fought to keep new vehicles affordable for their customers. For the past 15 years, more than 90 percent of all new-car and -truck dealerships in the United States have been NADA members.

Prior to the start of the 2017 convention, the NADA Foundation donated $50,000 to the Emeril Lagasse Foundation, which supports organizations that create opportunities to inspire and mentor youth through culinary, nutrition and arts education with a focus on life skills development.

Since its inception in 1975, the NADA Foundation has had a long history of providing financial support to New Orleans and the surrounding communities.

“The NADA Foundation, through amazing contributions from our dealer network, has supported dealership families, military families and children in need from natural disasters and times of emergency, like hurricanes Katrina and Rita and most recently, the flooding in Baton Rouge,” said Annette Sykora, chairman of the NADA Foundation. “Through it all, NADA has been there to help.”

“NADA was formed to make sure that entrepreneurs could open local dealerships and provide affordable cars and transportation to farmers, factory workers and people from all walks of life,” said 2017 NADA Chairman Mark Scarpelli. Scarpelli, who officially became chairman of NADA during the convention, is the president of Raymond Chevrolet and Raymond Kia in Antioch and co-owner of Ray Chevrolet and Ray Chrysler-Jeep-Dodge-Ram in Fox Lake, IL.

During the convention, Scarpelli unveiled a new initiative designed to help local dealerships showcase the benefits they bring to their millions of customers, the 1.1 million dealership employees in the U.S., and communities across the nation.
The initiative--MyDealership.org--utilizes videos, social media platforms and public service announcements to communicate the significant benefits of a strong and vibrant franchised dealership network.

“There are five hallmarks of any local dealership in America today: We are local; We are modern; We are diverse; We save people money; And we create great jobs,” Scarpelli told the audience at the convention.

Scarpelli's top priorities for 2017 include advocating on legislative and regulatory issues in Washington, D.C., promoting the consumer benefits of local dealerships, meeting with auto manufacturer executives, and getting the next generation of dealers involved in their trade associations and on Capitol Hill.

“We're advocating for clarity with the new administration and Congress, whether it's related to auto financing, new tax proposals, vehicle recall policy or fuel economy rules,” Scarpelli said. “We're concerned about vehicle affordability for consumers, period. We have to make sure we keep our customers top of mind when dealing with all of these issues.”

Also during the convention, Carl Swope, president of Swope Toyota in Elizabethtown, Kentucky, was named the 2017 TIME Dealer of the Year. It is often considered the most prestigious honor a new-car dealer can receive. Swope was selected from a group of 49 nominees from across the country. Those who are nominated perform heroic community service and are strong advocates for improving the world around them. (Autobody News will feature Carl Swope in the April issue of the magazine.)

Sidney DeBoer, the executive chairman of Lithia Motors, Ashland, OR, and Amy Purdy, who overcame a partial leg amputation to become an award-winning adaptive snowboarder, brought the final general session of the NADA Convention to a rousing close.

DeBoer, who is also dealer principal of Lithia Chrysler, Dodge, Jeep, worked in many positions at the dealership starting as the office manager. His dad’s death in the late 1960s thrust him into the role of running the dealership.

"I made 35 sales that first month," he said, noting his dad had served as the chief salesperson prior to his death. "Those sales made me strong. They gave me the strength I needed to go on."

It was soon after that turbulent time that DeBoer spearheaded the drive to take the dealership public. Today the company—now led by his son Bryan DeBoer—sells 30 brands in 153 stores located across 17 states.

“People can do a lot more than they think they can,” he said. His company’s success "came about due to a decision I made one day after a tragedy. You can do anything anyone else can if you put your mind to it."