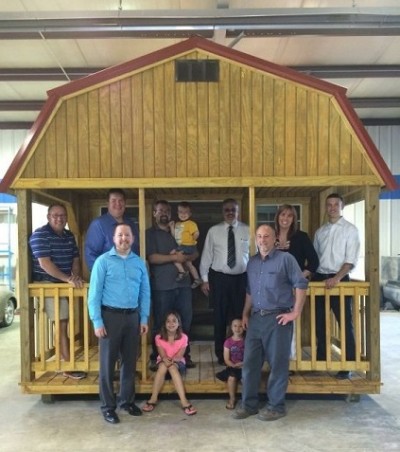 Santa Claus has a new home in Bryan, Ohio, thanks to a local auto body shop owner. Jim Kozumplik of Auto Styles Collision & Repair spent the last few months building a Santa house at his body shop, to show his support of the community and expand his customer base.

The business owner recently completed the Williams County Leadership Program offered by the Bryan Area Chamber of Commerce and the participants needed to decide on a class project. Kozumplik, who has lived in the Bryan area for 40 years, said the town has always had the same Santa house and he suggested that the group build a new one.

After purchasing the basic shell and the necessary materials with funds donated by the surrounding community, including the Kiwanis and Rotary clubs as well as Spangler Candy, the Leadership time began working on the project in June. Every time he went to visit local community groups, he invited them to stop by and check on his progress.

“I’ve had 100 people I never met before walk through my shop to look at the Santa house,” said Kozumplik, who opened Auto Styles in 2004.

He had been working at a nearby Chrysler dealership running their auto body shop, and was approached to open his own business. Four years after running it with a partner, Kozumplik realized it wasn’t a good fit and they went their separate ways.

"Most technicians don’t realize what it entails until they start. You have to be mentally ready,” he said. “It’s not just working on cars all day. There’s so much more.”

“I can’t see how shops can run without being a DRP,” he said. “What I do is go to local agents, set up a personal relationship with them and they give me customers on a daily basis. Being that we’re in a small, rural area, it’s essential.”

Currently, Kozumplik said 95 percent of his business is through insurance but that can change from month to month.The business owner said he does not use aftermarket parts for his repairs. Instead, he purchases parts from Yark Automotive Group and Brown Automotive. Both Toledo-based businesses are part of the Conquest program, which offers collision-related OEM parts to independent auto body shops at aftermarket prices.

When an insurance adjuster suggests that Kozumplik uses aftermarket parts, let’s say for a new bumper, he said, “I won’t do that. I’ll buy a new bumper at the same price so the customer is getting exactly what the manufacturer put on the vehicle.”

Running a mechanic shop on site as well as his auto body shop has allowed Kozumplik to diversify his business.

“I double my customers and can do everything in-house,” he said. “You have to be able to diversify your income stream to make it in a small town like this.”

Working in a county of approximately 30,000 people, Kozumplik said he tried advertising on the radio and in newspapers but he found what works best to drive business is serious public relations and building personal relationships. When his business got hit with the recession, like others across the nation, he found that getting his name out in the community and building their trust, has made a big difference over the years. This includes his volunteer efforts remolding a bathroom for the country library, and supporting car shows and festivals in Bryan.

“Being in a small town, it’s hard to run a business,” said Kozumplik. “The more you can do within the community you’ll be further ahead.”