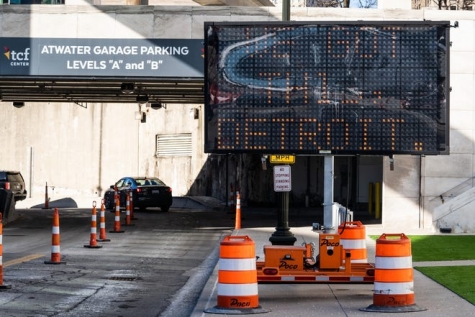 The Detroit Three's autoworkers who live or work in Detroit can now get their COVID-19 vaccines.

That means at least 8,000 union members working for Stellantis, formerly Fiat Chrysler Automobiles, will be eligible for the shots. Most of those workers work for two Jeep plants in Detroit, others live in the city and work for other Stellantis facilities.

Also thousands more manufacturing workers, even those who work for Ford Motor Co. and General Motors, can also get the vaccine, provided they live in Detroit.

Detroit Mayor Mike Duggan on March 2 expanded vaccine availability in the city to those in manufacturing.

“Manufacturing requires large numbers of employees to work in relatively close proximity to each other day after day," Duggan said. "So we felt it was important to prioritize them as a group to protect them, the public and our economy."

The city will start by offering the shots to employees of Stellantis' two Jeep plants as well as to other autoworkers at the TCF Center downtown.

The city is using either the Pfizer or Moderna vaccines. It has not yet received any of the Johnson & Johnson shots that have just been approved. Detroit has received 106,000 Moderna shots and 21,530 Pfizer shots.

Any autoworker at the Detroit Three manufacturing plants can get a vaccine from the city, and there are no age restrictions, Duggan said. The only criteria is the autoworker must either live in Detroit or work in Detroit.

“If you live in the city, but work in Dearborn or Warren---or no matter where you live, but you work in Detroit---all you have to do is call the number and get your vaccine in a matter of days," Duggan said.

To schedule an appointment, autoworkers who match that criteria can call 313-230-0505. They will need to show proof of employment such as a pay stub or company ID when they arrive at TCF for their appointment, Duggan said.

In a show of solidarity March 2, UAW Vice President Cindy Estrada rolled up her sleeve and received a vaccine at the Detroit Police Department as Duggan looked on.

The mayor said that all employees at...

...the Jefferson North Assembly and the new Mack Assembly Jeep plants will be vaccinated in a partnership between Stellantis and Ascension Medical Group.

Stellantis is administering vaccines at the FCA Family Health and Wellness Center. Employees will receive information on how to make an appointment.

Stellantis' employees will be given more detailed instructions on the program in the coming days. The company will contact workers at the Jeep plants directly to schedule their appointments, the city said in a statement.

A Stellantis spokeswoman said the automaker is pleased that Detroit is making vaccines available to manufacturing workers who live or work in the city.

"We are partnering with Ascension Medical Group to administer the vaccines for our employees at the company’s new health and wellness center in Detroit," said Jodi Tinson. "Today’s announcement is an important step in protecting our employees and our communities, so we can return to the lives we all want to live. We look forward to working with other health departments to make vaccines available to the rest of our Stellantis employees following local distribution plans."

The city is also administering shots to employees at Ford supplier Flex-N-Gate and Stellantis supplier Dakkota, among others, Duggan said.

In addition to Detroit, Boone County, IL, will provide Stellantis vaccines for employees at Belvidere Assembly, where the Jeep Cherokee is built, the UAW said.

Stellantis recently secured shots through Illinois' Boone County Health Department and already administered them to about a third of its workforce at Belvidere Assembly. These vaccines will be that group's second dose.

"But this is only a start," Estrada said. "We continue to work with the companies’ local, state, and federal health officials to secure vaccines for all working families that want to receive them.”

Any other large manufacturer located in Detroit who wants on-site vaccinations should contact...

...their liaison at Detroit at Work, the mayor said.

GM, which has Factory ZERO in Detroit and Hamtramck, is in discussion with the city on the specifics for a vaccine program for its workers, a spokesman said.

GM has said Factory Zero, which is currently under construction, will employ 2,200 workers when production begins later this year.

“GM is pleased to learn of efforts to expand vaccine availability," said David Caldwell, GM spokesman. "We have recently discussed this with the city, and look forward to working with them as soon as possible. We’re encouraging employees to get the vaccine when and where it’s available, and we will inform our employees as we gather more information.”

Ford does not have any factories in the city, but it and GM likely have employees who live there and work at suburban plants. Neither Caldwell nor a spokeswoman for Ford provided figures for how many plant employees lived in Detroit.

In reaction to the news, Ford spokeswoman Kelli Felker said the health and safety of its workforce is top priority.

"We are encouraging our employees to get a COVID-19 vaccine when they are eligible and if they are medically able to do so," Felker said. "Ford is working with government officials around the world to help ensure our employees have access to vaccines as they become available."

The automakers have said they were working with...

...public health officials on vaccine availability and priority group determinations in each state. In November, Ford ordered a dozen ultra-cold freezers to store the vaccines that require it.

UAW leaders and the Detroit Three speak regularly to work on a plan to get the vaccine to all 150,000 union members at the three carmakers. But they too are still waiting on various states, including Michigan, to offer more details on vaccine availability.

“By declaring manufacturing workers 'essential' and protecting Detroit residents and Detroit workers through access to the vaccine, Mayor Duggan has taken major strides to protect UAW members, their families and their communities,” Gamble said in a statement. "It’s essential that manufacturing workers have the ability to be vaccinated and help end the spread of this pandemic."

Gamble said even with these vaccinations, all union members should continue to follow safety protocols in the plants.