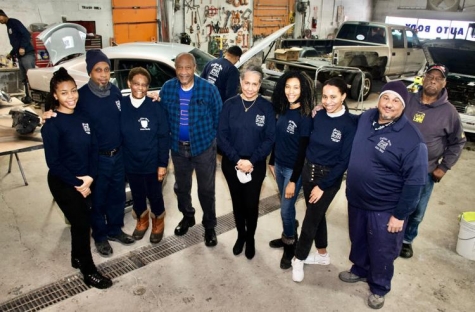 There may be a mangled car in Sydney Jackson’s future.

Jackson, 23, is the daughter of Wayne Jackson, co-owner of Collier Brothers Auto Body Company Inc., one of the oldest African American-owned and operated businesses in St. Louis.

Co-founded in March 1946 by Wayne Jackson’s grandfather, Raymond Collier Sr., and Collier’s brother, Elie “Bud” Collier, the eraser of dents and repairer of fenders is preparing to celebrate 75 years in business in March, while at the same time remaining mindful of the road ahead.

Profits are intermittent and the roster of competitors has swelled since the brothers chipped in $350 each---mustering-out pay from service in the Army and Navy---to help launch the business.

The father/daughter Jacksons say discussions recently began on who will steer the company forward. Both want to see it remain in the family past the next major milestone.

“It's always been a family business,” Sydney Jackson, taking a break from braiding her sister’s hair, said in an interview with The American. “We want to uphold that culture and the legacy that was set there by our forefathers...Ideally I would like it to stay with somebody related to the Collier Jackson lineage.”

In the segregated St. Louis of the 1940s, the only place the founders could open their business was Mill Creek Valley---an historic, largely Black neighborhood that faced the wrecking ball in the 1950s---according to the company’s website and historical reports.

Craig Collier, Elie Collier’s son and co-owner with Jackson, described the earliest incarnation of the shop as not much more than an “oversized one-car garage.” But demand and the need for more space quickly grew.

The business moved five times before landing in 1958 at 4561 Delmar Blvd. on what Wayne Jackson, 53, describes as the “Delmar Divide.” To the South, near the Central West End, home prices can eclipse $1 million and “North of us, it’s the opposite,” Jackson said.

Through the 1970s and ‘80s, business was booming, the two said, with Jackson estimating the current footprint is...