Written by Bill DeBus, The News-Herald 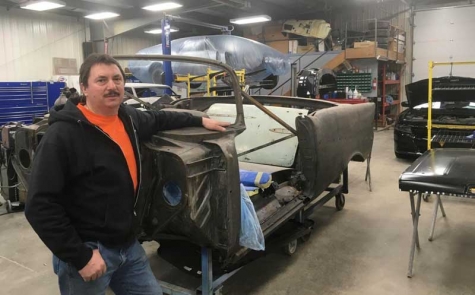 Frank Latin, owner of Frank's Auto Body & Restoration, stands beside the body of a 1957 Chevrolet convertible that's being restored at his shop. Bill DeBus, The News-Herald

Frank Latin doesn’t have to leave work for long to check how construction is going at his business’s soon-to-be new location.

Actually, he only needs to take a quick walk next door to his current shop in Madison Township, OH, to view the future base of operations for Frank’s Auto Body & Restoration.

Construction is underway on a building that's nearly triple the size of the current shop, now situated at 7279 North Ridge Road.

The next home of Frank's Auto Body & Restoration at 7277 North Ridge also will include new equipment that's more efficient and improves air quality for employees.

When the new, 22,500-square foot shop opens later this year, it will mark the third location in the shop's 28-year history.

The business specializes in painting and refinishing and collision repair of cars and trucks, as well as some commercial vehicles; and restoration of antique and muscle cars.

Latin started it in 1993 at a rented building in Madison Township, not far from his existing site.

He decided to venture into ownership after working alongside experienced auto body technicians at several local dealerships. Latin gained a foundation in the profession by studying auto body repair at Auburn Career Center in Concord Township.

About six years later, Latin was eyeing expansion, and decided to purchase the property immediately to the west of his existing 9,000-square foot shop.

“We knew sooner or later at the pace we were going, that we were going to be running out of room,” he said. “So for future development, we bought that.”

Site preparation for the new shop began in early 2019 and...