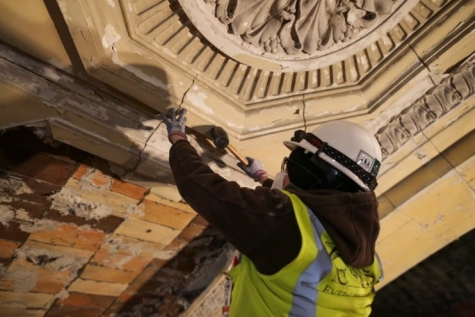 ...preserve and recreate the faux stone appearance just as the original architects intended.

While some digital tools will be used, a team of 15 to 20 craftspeople from EverGreene will do most of the plasterwork by hand using floor-to-ceiling scaffolding.

EverGreene has been part of Detroit’s comeback for more than two decades, having contributed to projects at Orchestra Hall, Detroit Public Library, Detroit Institute of Arts and the Fisher Building. The company has also performed plaster and decorative painting work on the Michigan State Capitol building.

The firm is familiar with train station revivals, having worked on restoration projects for New York City’s Grand Central Station and Union Station in Los Angeles, as well as depots in Seattle, Cincinnati and Sacramento.

Jeff Greene, executive chairman and founder of EverGreene, said Michigan Central Station is an extraordinary, well-made building whose renovation will attract national attention when it reopens.

“To play even a small role in the transformation of this iconic building is incredible,” said Greene. “There’s a lot of gratification, not only in the craft and what we do with our hands, but the act of elegantly preserving something that means so much to this city. A project of this scale will reverberate on the national stage.”

Greene noted that buildings like Michigan Central Station contribute to the city’s collective source of memories and create a sense of place.

“When we bring life back to these buildings, they can have a huge impact on the neighborhood and the community,” he said. “People identify with a physical environment, it’s a repository for memories. Michigan Central Station was and will be again a central place in what makes up the personality of Detroit.”

EverGreene will attempt to salvage and repurpose as much of the original building material as possible. The original plaster was created to...