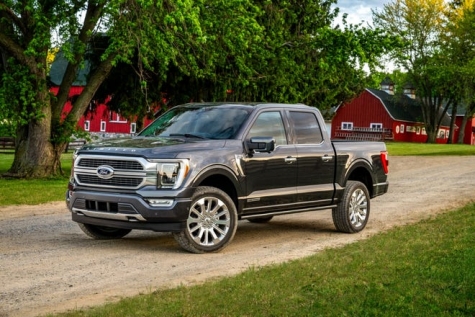 In addition to thousands of early production 2021 Ford F-150 pickups being stockpiled in parking lots around Detroit Metro Airport for a quality review, a steady stream of the new vehicles is being delivered to a site near the Flat Rock (MI) Assembly Plant for installation of seat belts and to fix other issues, the Free Press has learned.

The work is not being done by UAW members based at the Downriver plant, which builds the Mustang. Those workers noted their hours had even been cut in recent weeks.

Vans and buses filled with other workers have been seen arriving and departing a Ford site on Vreeland Road across from the Flat Rock plant as UAW members at Flat Rock wonder what's going on. The vans are shuttling drivers.

"I’ve seen charter buses, like you take to the Lions game. It's crazy," Scott Sawatzke, a UAW team leader and Ford employee for 33 years, told the Free Press.

In recent days, F-150s have been driven to the site by individual drivers and also have been spotted on truck haulers. Ford confirmed Dec. 23 that workers in the two buildings across from the assembly plant, where quality checks are being made, are not union members.

"Ford is proud to employ more UAW workers than any other automaker. We value our UAW workforce and, in this case, need them focused on building the Mustang," said Kelli Felker, Ford spokeswoman.

In response to an inquiry from the Free Press on Dec. 23, officials at the labor union's international headquarters in Detroit said they were investigating the situation.

Gerald Kariem, vice president and director of the UAW Ford Department, said, "We are engaged with the company to fix this situation immediately."

UAW spokesman Brian Rothenberg said, “The UAW continues to object to nonunion third parties in these instances. We continue to look into the issues at this facility and continue to believe this should be UAW member work."

Ford confirmed that trucks are being taken to the site, which includes the Troy Design and Manufacturing (TDM) facility, a wholly owned subsidiary of Ford. It is one of two buildings across from the plant where...