A New Repair Shop in Town 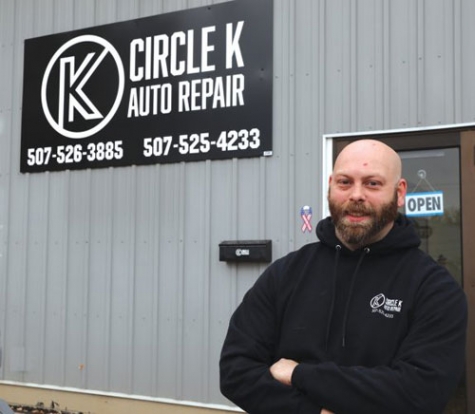 John Koestler stands outside of his shop, which used to be the home of Paul’s Exhaust and Auto Service. Koestler is a veteran who has returned to the Blue Earth area to do a job he loves. His shop is open Monday through Friday.

Drivers entering Blue Earth, MN, from the east end of town on County Road 16 have probably noticed a new business as they come up the hill by the Blue Earth Stockyards.

John Koestler, the owner of Circle K Auto Repair, opened his new business in the middle of August.

“Owning my own shop is something I always wanted to do,” Koestler said. “I just did not know when it would happen.”

The Blue Earth native followed quite an interesting path to reach his current destination.

“I graduated from Blue Earth Area High School in 2004,” he said. “And I was able to take some interesting classes while I was in school.”

One of those classes was the Super High Mileage class.

“We took our entry up to the Brainerd International Speedway,” Koestler recalled. “And our vehicle achieved 523 miles per gallon.”

He was also on a team which competed in the Ford AAA Auto Skills Competition.

“I enjoyed that and had the highest score on our team,” Koestler noted.