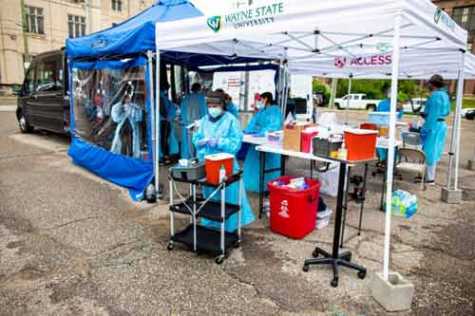 After more than two months, the coalition has tested more than 10,000 people in Michigan, and a new expansion promises to increase that number exponentially as infections surge across the country.

One of the Transits is geared specifically toward health care workers, offering better protective equipment, drop-down workspaces and centrifuges for analyzing blood. This provides a safer and more effective environment for health care workers whose work remains so crucial amid the coronavirus pandemic.

According to Phillip Levy, vice president of translational sciences and clinical research innovation at WSU as well as the chief innovation officer for WSUPG, the expansion allows more local communities to take advantage of testing.

He also noted having more test sites allows the units to expand their capabilities into blood pressure screenings and HIV tests.

“As a community nonprofit, we see firsthand that major health disparities exist within the most vulnerable populations. During these trying times, this project has been a heartwarming reminder of the strong bonds of humanity and what can happen when we join hands to battle even the most formidable of challenges,” said ACCESS COO Lina Hourani-Harajli.

When the program launched in April, two Lincoln Navigator SUVs were used for the testing sites. Borrowed from the Lincoln Personal Driver program, the Navigators will continue to serve in the fight against COVID-19 by running equipment and supplies between the test units and laboratories.

Previous Page Next Page »
Read 475 times
More in this category: « Auto Body Shop Has a Woman's Touch No Barra, Manley Meeting: Appeals Court Agrees with GM but Won't Reassign Case Against FCA »
back to top