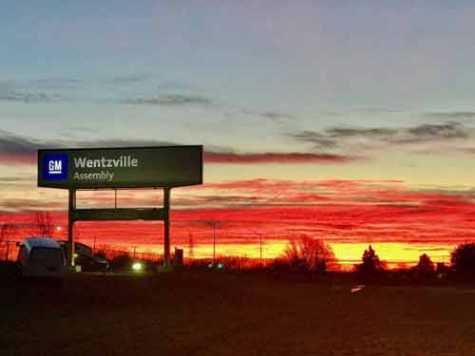 UAW Local 2250 President Glenn Kage knows exactly when he will go to General Motors for a "serious conversation" about shutting down the Wentzville Assembly plant for 14 days because of workers with coronavirus.

Local 2250 represents workers at the plant, located about 40 miles west of St. Louis. The union has already asked GM to shutter the facility for 14 days and do a deep cleaning after five people tested positive for coronavirus. But the automaker declined.

Instead, GM made some changes to improve safety protocols to protect workers and trace whether there has been any spread of coronavirus, Kage said. A GM spokesman said the automaker evaluates each plant on a case-by-case basis, but that GM will always do what’s medically necessary to keep people safe.

“They’re trying to do what’s right, but this virus is hard to attack, hard to trace and hard to contain," Kage said. "If we see a large outbreak in one area, then we need to have a serious conversation about what to do to protect our members.”

Wentzville is one of GM's key plants. It assembles the profitable midsize pickups: The Chevrolet Colorado and GMC Canyon. GM also builds the Chevy Express and GMC Savana full-size vans in the 5.1 million-square-foot plant.

On June 8, Wentzville had one person test positive for coronavirus since restarting in mid-May. By the afternoon of June 11, that number shot up to five confirmed cases, Kage said. There's no telling where the workers contracted the virus.

"We've asked GM to shut it down and do a deep clean," Kage said. "We’ve had conversations about it. They’re trying to catch it with temperature monitoring to minimize contamination in the plant.”

There are about 4,100 total workers at Wentzville, so five sick employees is a small percentage of the workforce, Kage said GM told union leadership.

But Kage said three of the people who tested positive for coronavirus all worked in the same area. The union and members are scared that it will spread.

"We're starting to see it spread and we’re going to keep an eye on it," Kage said. "Hopefully, GM will do the right thing and halt production and do a thorough cleaning so we’re all safe."

For now, GM has opted to aggressively prevent the disease from getting through the gates and to trace and track it if a workers does develop it.

Here are some other safety measures that GM has had in place at Wentzville:

GM spokesman Jim Cain said none of GM's plants have had to halt production due to people sick with coronavirus since May 18 when GM restarted many of its U.S. operations. Ford Motor has had several temporary production disruptions due to coronavirus.

Cain credits GM's systematic safety approach for keeping operations going. The first step is to keep people who are carrying the virus out of the plant through temperature monitoring and health questionnaire screening.

GM also keeps in regular communication with local union leaders such as Kage and Chambliss.

“We have dialogue all the time and that’s one of the reasons why our protocols have been successful and our restart has gone as smooth as it has," Cain said. "We really do listen and try to take all the necessary steps.”

Cain is realistic and said until there is a vaccine or cure, there will occasionally be positive cases, especially in a large company. He said it is "what you do to keep it from spreading that matters.”

The UAW is aware of its members' concerns at Wentzville and is being diligent to be sure all safety protocols are followed to ensure a safe and healthy workplace.

"We are working right now with the local union and General Motors to monitor the situation in Wentzville and every other plant," said UAW spokesman Brian Rothenberg.

But Wentzville's Kage is in the trenches. He and Chambliss are keeping a close eye on any signs of increased sickness, he said.

“If we have one case inside the plant, it’s dangerous; having five in there is five times more dangerous," Kage said. "Are we going to have 10? What’s that number? We haven’t had that discussion. It needs to be discussed because if we see that number jump again, we’ll have some serious conversations."

Read 1620 times
More in this category: « Kansas Secretary of State Inspects Voting Shields at Binswanger Glass MN Man’s 1959 El Camino Has a Chance to Be Turned Into a Hot Wheels Car »
back to top