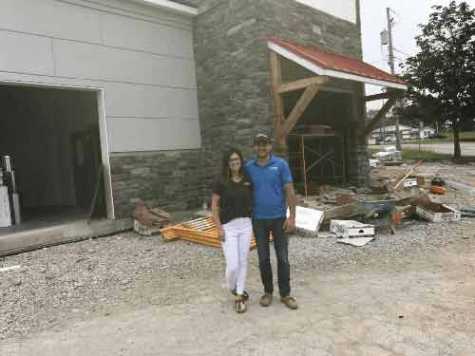 Amy and Tony Perrino were sitting in their Willoughby Hills, OH, living room around 10:30 p.m. Sept. 27, 2018, planning a vacation on Amy’s tablet, when Tony got an emergency call from an employee.

The Chardon, OH, business they had purchased in June was on fire.

“Tony just jumped off the couch and ran out the door,” said Amy, who stayed home with their two young boys who were asleep, “blissfully unaware,” in bed.

Water Street was closed, but Tony was ushered to the site of the huge conflagration.

“I was greeted by 12 fire departments,” he recalled.

Because a second roof had been built over the first one, it wasn’t possible to put the fire out entirely and the firefighters had to let it burn, protecting neighboring buildings, he said.

It was 5 a.m. before the last truck left.

“I just started sweeping the street. I didn’t know what else to do,” he recalled.

Eventually, the cause of the fire was narrowed down to an electrical source near the furnace, Tony said.

The fire jumpstarted plans the young couple had to enlarge the Chardon Collision building to nearly double the original size---just under 12,000 square feet---so they started the lengthy process of getting drawings made, funding found, zoning handled and permits approved, he said, adding the burned-out shell had to be demolished and removed.

The building was insured; however, since they had owned the facility for just three months, there were complications, some of which are still unresolved, Tony said.

Regardless, concrete walls for Action CARSTAR-Chardon Square started to go up in November 2019.

“The fire derailed our business,” Tony said, adding, however, it didn’t stop the couple from making their mark in Chardon.

When they bought the collision center from Bob Sipos, the deal included his Firestone tire business just down the hill.

“Customer response has been great,” Tony said. “Bob stops in all the time. His customers trust he’d sell to people who care.”

Construction, handled by Tony’s father, Pat Perrino, owner of Perrino Builders, continued until winter weather called a halt. Come spring, the red roof, visible from Chardon Square, went up and the concrete floor was poured May 26---all despite some rescheduling required by the COVID-19 construction regulations, Tony said.