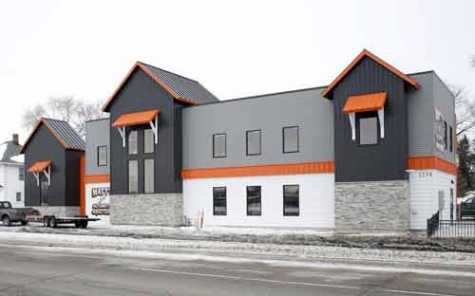 Matt's Automotive Service Center is back to where it began.

The 9,750-square-foot building opens for service on Monday, Feb. 10, with an open house scheduled for Saturday, Feb. 15.

It sports a big, climate-controlled service bay with seven lifts, extensive sound insulation, plenty of windows to bring in natural light, and touches that range from a $30,000 tire tread checking system to a room set aside for staff training and customer classes.

Owner Matt Lachowitzer said the $1.7 million investment is both a recruiting tool and a thank you to a part of Moorhead that helped him jumpstart his Fargo-Moorhead fleet of auto and collision repair centers.

“Obviously, we think it was important to rebuild here.

As workers installed and calibrated equipment or toted in new furniture, Lachowitzer showed off the building he had designed to his specifications.

The customer intake area is fully enclosed, leading to an auto detailing area, and then a repair bay with room for 20 cars to be worked on at the same time.

The repair bay is brightly lit and is air conditioned in the summer.

The building’s sound system is also zoned to allow workers in different areas to listen to the music or news they enjoy most.

Lachowitzer said he wants to make the environment as welcoming as possible for employees.

“I wanted this to be like a talent recruiting tool, basically,” the former auto technician said. “The whole thing was built around ease of use. If I was a technician still, this is exactly what I would want.”

Nearly everything is new, but there are some touches of the old. Lachowitzer made sure that lift doors, heaters and other items that could be salvaged from the old shop were incorporated into the new shop.

The first floor customer waiting area has four televisions, a coffee bar, USB ports and plenty of plug-ins for computers, Lachowitzer said. But you won’t see tires or other auto merchandise, he said.

“I wanted it to really feel like you’re in a living room, not an automotive shop,” he said.