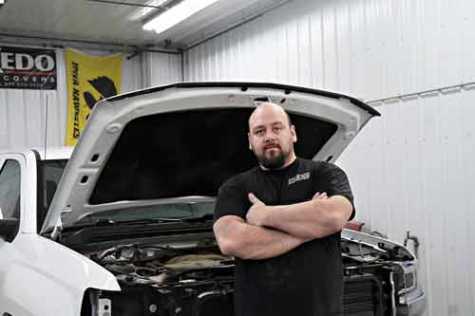 Adam Koster is the new owner of Paullina Body Shop. The 36-year-old Newell native earned a two-year auto body degree from Iowa Central Community College in 2012 and began working for the shop in Paullina in 2014.

The start of the new year meant a new job title for Adam Koster: Owner of Paullina Body Shop.

The 36-year-old took ownership of the auto body shop from Jarrod Harms on Jan. 1. The shop is located at 212 W. Broadway St.

“I’m just looking forward to being able to provide a service for the community and do good things and have a good year,” Koster said, adding he does not have any particular changes in store for the business under his ownership.

He began working there about five years ago.

The body shop has been in town for more than 50 years and has changed owners a few times before Harms had bought it on Jan. 1, 2012.

He worked at Sioux Body Shop in Sioux Center until he came to Paullina in 2014.

In September 2019, he and Harms began talking about switching ownership of the shop.

“I’d always wanted to own my own shop, and he was wanting to sell,” Koster said. “So we just figured we’d switch.”

Koster and Harms, who still works at the shop, handle any auto body-related issues customers come to them with.

“We can do restorations, we do tractors, cars, trucks,” Koster said. “We do glass replacement and windshield chips.”

The shop also has a bay in the back for paint work, which was installed in 2016. Koster said he uses the stall at least twice a week.

Most of the shop’s customers are from in or around Paullina. Koster said many of the types of vehicles that get brought in are newer models.

“We don’t get much of the older stuff anymore,” he said.

Koster and his wife, Kayla, live in Paullina, where they are raising three children, son, Dayvian 11, and daughters, Adalya, 8; and Rilynn, 4.

He enjoys tinkering on cars in his space time and riding motorcycles.

Making his customers happy is Koster’s goal for each project he works on and is what he most enjoys about the job.

“They come to pick it up when we’re finished and they get to see it look like new again,” he said.

Read 318 times
More in this category: « Detroit-Hamtramck to Be GM’s First Assembly Plant 100 Percent Devoted to Electric Vehicles Lordstown Motors in Ohio Planning to Use $200M Federal Grant to Help With Production »
back to top