RM Sotheby’s Will Offer Single-Owner Collection of 230 Cars in Elkhart, In 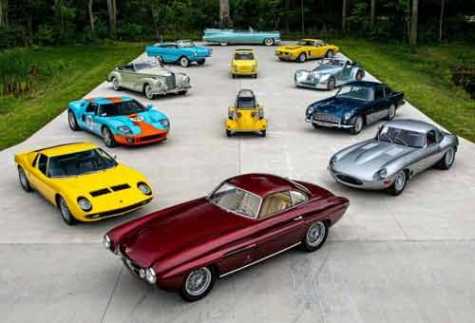 Some of the 230 cars going to auction May 1-2 in Elkhart, IN, from a single collection. RM Sotheby's

As it readied for its annual Arizona auction of collector cars, RM Sotheby’s announced it will stage a 230-car single-collection auction May 1-2 at Elkhart, IN.

The docket also will include 30 motorcycles, a wooden boat, collectibles and more, the auction house said in its announcement.

“The quality of the cars and the way that the Elkhart Collection has been maintained and looked after is incredible,” Gord Duff, global head of auctions for RM Sotheby’s, was quoted in the news release. “The building that they’ve been housed in is much more than a storage facility and has been designed specifically for the care of collector cars.

“More than ever, it’s true to say that there is quite literally something for anyone in the collector car hobby within this group of cars, from microcars, to classics, ‘50s and ‘60s sports cars, the modern era, and beyond,” he added.

“If there’s something you like, you’ll likely find it in the Elkhart Collection.

“These cars are all great examples of their kind, meticulously chosen for the collection, and we’re excited to bring them to market almost entirely without reserve for an auction the entire hobby can enjoy.”

While not revealing the consignor, or perhaps the estate involved, RM Sotheby’s said the docket will include trucks and trailers and that nearly all of the cars, motorcycles and automobilia will be offered at no reserve.