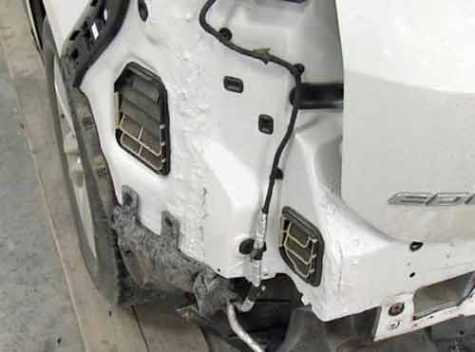 Damage to a vehicle in the shop at Waln Collision & Repair in Fairfax, Iowa, on Monday, Dec. 16, 2019. Aaron Hosman/KCRG

Some area vehicle repair shops are starting to see an increase in crash damage, despite a slow start to winter weather.

Mike Daly, manager of Waln Collision & Repair Center in Fairfax, Iowa, said his shop is starting to schedule out appointments weeks into the future and those repairs could start costing more money.

Daly said the cost increase is caused by increased technology in new vehicles. He said it not only takes more time to repair sophisticated features, but also more money to fix the damage.

“The reason you see the dollar amount go up is because of all the technology they put in, you know, adaptive cruise control, lane departure assist. You see a lot of that drive up the severity of accidents,” Daly said.

Recent winter weather-related crashes are the cause of some of the damaged vehicles in the shop, Daly said. He also said deer and distracted driving crashes are the other top reasons for repairs.

“Rear-ending, with distracted driving and things like that, people don't pay attention, they don't give proper distance between vehicles and before they realize it, they're trying to slam on their breaks and in not enough time,” Daly said.

Daly said, in the past, it would typically cost his customers around $200 dollars to repair a normal headlamp in his shop. Due to advancements in technology and features in some parts, the cost has risen. Daly said now some single headlamps could cost between $1,800 and $2,000 dollars.

Daly recommends drivers remember how to drive in winter weather and get rid of distractions in the car. He said the biggest key is to give more space in between vehicles in winter months, because the time it takes to come to a complete stop is longer on snow and ice.