Randolph County, IN, Resident in Search of a Piece of his Past 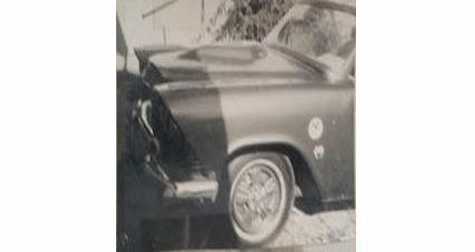 This photo shows the front of the Plymford 01 which was a 1957 Plymouth with the Tailgate glass from a 1958 Ford station wagon for a windshield. Winchester News Gazette

Most young men develop a love of the automobile at some point in their youth.

This love led 15-year-old Rick Thornbro to build his own car. It was the first car he built and his very first personal car. He completed building the car in about a year finishing sometime between 1968-1969 when he was 16.

He attempted to register it in Parker City, IN, but because it was a completely custom-built car, they had to check with the main DMV in Indianapolis to see what they needed to do to register this car. Thornbro had to give them all the receipts along with specific make, model and the year of all the different parts that were put into the finished car. It was then registered as Plymford 01 in Indiana. His original paint color was Mallard Duck Blue, an AMC color at the time. The basic body of the car was from the front end of a ‘57 Plymouth, the back end of a ‘56 Ford and a ‘58 Ford station wagon tailgate glass for the windshield.

Thornbro loved his creation; but, being a teenager, he sold the car after a couple of years for a more conventional vehicle. Little did he realize he would go on to having a long and well-appreciated auto body and paint career spanning over 45 years. He has traveled between Muncie, IN, and cities in Tennessee over the years.

Thornbro never forgot about his first car. He kept the pictures of his first car and over the years has longed to have it back, due to its uniqueness and being his very first build.

About 15 years ago, he was visiting Muncie and saw his beloved Plymford sitting in a high front yard on Madison Street. It was painted gold metal flake at the time. “I really wish I had attempted to buy it back then and there,” he sadly states. “I haven’t seen it since. I have been to numerous car shows in the area asking about it and no one seems to have seen it,” he adds.