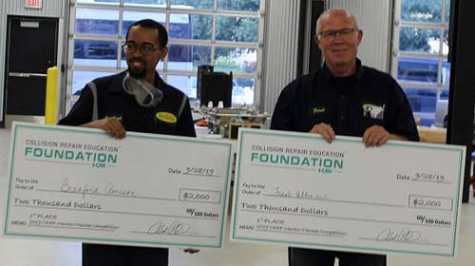 Christen Battaglia, director of strategic partnerships for CREF and event organizer said, “The goal of the competition was to recognize the performance of the next generation of collision technicians and their mentors on critical skills necessary to repair today’s high tech vehicles. Mentor and mentee teams performed and were tested on competencies the industry has deemed necessary for an entry-level technician. CREF wants to promote mentoring and celebrate the companies and people who are preparing the next generation of collision techs.”

“For a first-time event, everything went seamlessly,” Battaglia added. “It went really well. We had nine teams competing, compared to our goal of ten to 12 teams, which was great, though we would have liked to see some participation from local shops. The event ran from 8:30 a.m. until 4:15 p.m., and only a couple of teams were unable to finish; most teams were wrapping up by 3:15 p.m. The mentors really enjoyed it as much as the mentees, and the competition really promoted the idea that there’s a lot of value in mentoring for the individuals and the companies who offer mentorships.”

Teams representing Service King took first and third place, while Caliber Collision’s team came in second. Mentee Bradford Amison and mentor Frank Allen took the gold, representing Service King in Leander, Texas. Amison graduated from WyoTech in Laramie, WY, and has been a mentee for two years. Each member of the winning team received $2,500, and their company received a Chief PNP90 riveting tool, valued at $8,000.

A mentor for over two decades, Allen believes that a good mentoring program enables the industry to “encourage individuals to enter and become skilled in the trade,” CREF wrote in a news release.

The silver place team consisted of mentee John Gault and mentor Bryan Parnell from Caliber Collision in Mt. Moriah, TN. Gault, a graduate of Mid Florida Tech, has been a mentee for just under a year, and Parnell has been a mentor for a year and a half.