Thurston’s Plus in Emporia, KS, Now Running for 15 Years 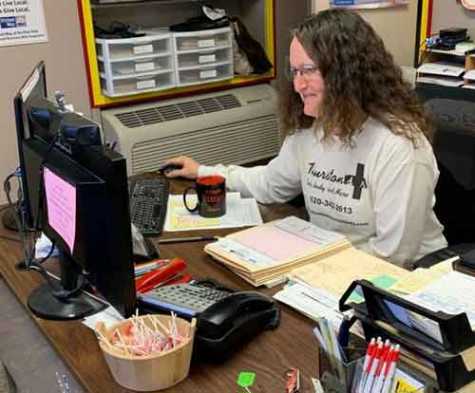 Beth Wilson works at her desk at Thurston’s Plus Auto Body and Automotive. She and her husband, Jesse, have owned and operated the business for more than 15 years. Zach Hacker/Gazette

There is never a boring day at Thurston’s Plus Auto Body and Automotive, located in Emporia, KS.

Jesse and Beth Wilson purchased the business in 2004. Now, 15 years later, they have undergone expansions and renovations, witnessed several changes in the way jobs are completed and have seen nearly everything. But Beth said the business’ motto has not changed.

Those three words are the mantra at Thurston’s Plus, and it’s something Wilson said she and her husband take great pride in — whether it’s through their business or in the community.

“We try to support any cause there is going on in town,” Beth said. “We need to support the community that has supported us.”

The Wilsons are regulars at just about any philanthropic event in town, and this past summer they donated $1,000 toward the repair of a helicopter window at the All Veterans Memorial after it was broken in an act of vandalism. They also try to shop local, buying as many parts as possible from other businesses in town.

It isn’t only local people, however, who have been on the receiving end of the Wilsons’ generosity.

One story Beth said “makes her heart smile” was when, on Christmas Eve one year, a young couple with two small children and a dog turned up at their door needing help. The family was on their way from Wichita, KS, to Kansas City during an ice storm, and a large pile-up on the turnpike claimed their Silverado as one of its victims. The Wilsons helped entertain the children and gave them Cheerios to munch on while the dog ran around the shop. It was four or five hours before their ride arrived to take them to Kansas City.

“We just helped them out,” Beth said. “And we still get a Christmas card from them every year.”