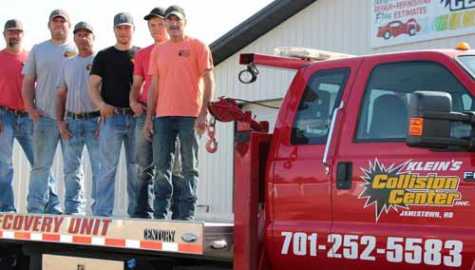 Neal Klein, owner of Klein's Collision Center located in Jamestown, ND, said working on cars is his passion which has helped him build a successful business over the past 34 years.

"I grew up with cars," he said. "My dad and seven uncles all had old cars."

Klein started working in body shops around the region in 1976. He opened his own shop ten years later.

"In 1986, me and my wife started it," he said, referring to Klein's Collision Center. "We added two employees in the first year."

Currently, there are six employees in the shop with his wife still in the office tending the bookkeeping duties. Even with the larger staff, Klein prefers to have his hands on a car rather than a desk.

"I have another employee that does most of the estimates," he said. "I love being out back working on the cars."

That has put him in a position to see a lot of changes in the body shop industry over the years.

"Cars are a little more complicated to tear down," Klein said, referring to the work that goes into removing the damaged parts before repairs can start. "There are so many plastic pieces these days. A bumper might have been just three pieces years ago but now can be as many as 40 pieces."

The more complex systems in a car's body have also raised the cost of the average repairs for something like a deer collision from about $1,500 back 20 years ago to somewhere between $3,500 and $6,500 today.

There are also electronic components that operate the airbag, seat belts and even the cruise control that must also be considered in some body repair jobs.

The body shop industry in Jamestown has become more consistent throughout the years, Klein said.

"It used to be more seasonal," he said. "We had fall deer hits and winter collisions and things slowed down in April and May. Now it's pretty much the same all year."

Klein said hiring and keeping good employees is the key to the business’ success.