In Their Merry Oldsmobiles: Lansing, MI’s, Car Brand Lives on for 15 Years 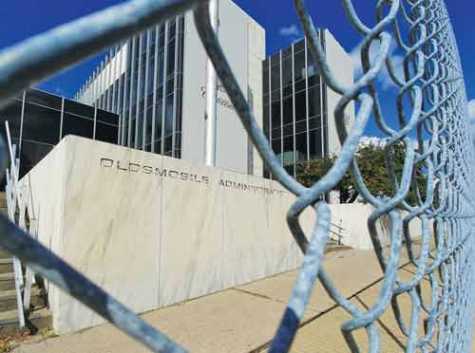 And though many repair shops carry garage in their namesakes, Badgley’s Garage is just that — one big bay that can fit two cars.

There is no office and nowhere to sit to wait for a repair. Customers are served through a small window with what looks like the square footage of a closet.

Manning the shop is Trevor Badgley, a third-generation Oldsmobile mechanic and owner of the garage, dressed in simple mechanic overalls. As the striking United Auto Workers show, General Motors is still a big presence in Lansing, but in 2004, the company shuttered its Oldsmobile division, the brand tied to Michigan’s capital for 107 years.

Inside the garage is a museum-quality display of Oldsmobile signs and memorabilia throughout the years, salvaged from former dealerships, garages and shops.

“We specialize in Oldsmobiles and are known for that around the country. We’ll have cars shipped in from Tennessee, Illinois and New York,” Badgley said. “Some of these Oldsmobiles have been passed down from generation to generation. Some are recent purchases that come back to Lansing because people are looking to buy the car their dad worked on at the factory.”

Despite a shortage of parts, manuals and mechanics, Oldsmobiles and their stubborn owners prove that the brand is very much alive in its hometown after being defunct for over a decade.

A step inside the R.E. Olds Transportation Museum sees a score of monthly magazines and newsletters from different Oldsmobile clubs across the country on how to maintain and find parts for the aging vehicles. Bumper stickers are also for sale, proclaiming “I don’t care what GM says, Oldsmobile will never die!”

With cherry red paint and chrome rims, the last Oldsmobile ran off the Lansing Assembly line in 2004 amid a flurry of national media parachuting in to write the obituary of America’s oldest car manufacturer at 107 years old.