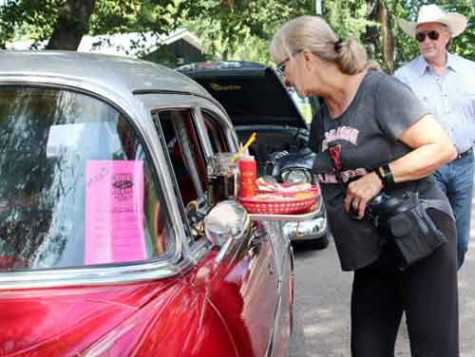 Connie Dodson checks out the interior of a 1956 Chevy Z10 which had an A&W order as a prop on the driver’s window during the Colonel Cody’s Cruise Show & Shine at Memorial Park. Tim Johnson/The North Platte Telegraph

Gaylen Rainforth spent four years and spent what he called “plenty” of money in the pursuit of some childhood nostalgia.

The project is the replication of a 1927 Ford Roadster that his older brother bought in 1956 and sold three years later to help finance his college education.

The vehicle, painted a “candy-obsession” red, was one of the classic and muscle cars on display Saturday, Sept. 7, at Memorial Park in North Platte, NE, for the 25th Colonel Cody’s Cruise Show and Shine.

“I was 6-years-old at the time and when he drove it into the yard, I just thought that was the coolest car I had ever seen in my life,” said Rainforth, who lives in Prosser, NE.

The car went through 13 different owners after Rainforth’s brother sold it and the siblings were never able to make contact with the most recent one. Since the original vehicle vanished, Rainforth said he took the steps to build a tribute — one part and piece at a time.

The body came from Michigan. The running boards, splash shields and the hood were handmade in Nebraska and the vinyl top was ordered from a company on the East Coast.

The car was completed in January and Saturday, Sept. 7 was the ninth outdoor car show it has been displayed at this year to go along with six other previous indoor shows.

Gene and Rose Wissenburg were part of the show as well, as they displayed a maroon 1947 Ford Super DeLuxe.

The vehicle was “frankensteined” as the parts from the bodies of two ’47 cars were combined in the project and the engine and transmission came from a ’78 Ford van.

The Newman Grove, NE, couple have about six years invested in the project and Gary said the interior, excluding the seats, still needs attention.

He added it is a labor of love and nostalgia as well.

“When I was in high school, my brother and I had a ’39 Ford which is pretty much the same body shape as this,” Gene said.

Isai Zuniga didn’t arrive in a classic car, but he left Memorial Park as the owner of one.