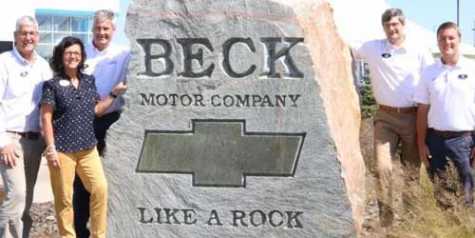 The free afternoon and evening includes the T.F. Riggs High School Pierrecussion Drumline, the Side Hackers band, pony rides, bounce house, and burgers/brat/beverages. Alongside the new, certified pre-owned and used vehicles on the Beck Motor lot, the Street Masters Car Club will show off their cars.

A video slideshow will spotlight the changing times, cars and people, “from lots of years, years leading up to what we are today,” said Jami Beck, marketing director. A little after 8 p.m., fireworks will be launched over the top of the Beck Motor building.

“We’ve been part of the community, selling new and used Chevrolet vehicles, for the past 50 years. We couldn’t be more proud of where we come from. We want to celebrate with you, our closest friends and loyal customers, so we’re giving you this party absolutely free,” said Jami Beck, speaking for the Beck Motor Company team.

Beck Motor Company can trace its heritage back to 1936 as the Pierre Automotive Company. In 1937, the firm became the McCallog Motor Chevrolet Company. In 1944, the firm was sold to C.W. Hinkley, who added the Cadillac car line in 1961. In 1963, it became Colonel Motors, and the Pontiac car line was added to the business.

Ken Beck purchased the firm in 1969. In 1973, it moved from its original 1930s location on East Dakota (present-day Fischer-Rounds Insurance Company) to 500 S. Grant. In June 2012, the company moved to its current location of 1905 North Garfield Ave.