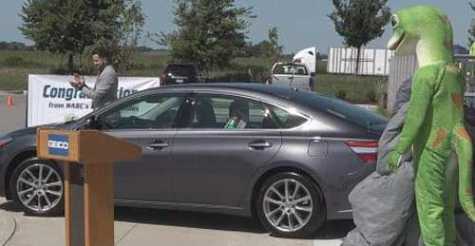 A Johnson County, Iowa, nonprofit received a donation on Thursday, Aug. 22 that staff says "changes the way" they can help people.

The donation was made possible because the Domestic Violence Intervention Program out of Iowa City was given a new car.

Thanks to a couple of different businesses working together, the nonprofit received a 2014 Toyota sedan to help with the organization's mission.

The car was donated through the National Auto Body Council's Recycled Rides program, where insurers and auto body shops repair and donate vehicles. GEICO, which hosted the event, Toyota of Iowa City, and ABRA Auto Body and Glass came together to donate the car.

When the Domestic Violence Intervention Program received this car, staff said it marked a chance to reach more people. For an organization that says it helped nearly 2,000 people last year, staff said this car will help them cover more ground.

"This car is going to be used by our mobile advocates, to travel where clients feel the safest," said Alta Medea-Peters, the director of Community Engagement for DVIP. "Meeting them at grocery stores, laundromats, after church, wherever they need us."

Organizers said donating the car and seeing the importance the vehicle will have was a special moment, too.

"To have a chance to chat with Alta and really have her personalize how this car's going to make a difference in the lives of victims of domestic violence," said Daniel Woodson, general manager of GEICO in North Liberty.

"We grew up here, so we feel that's a strong need as a family and as a business," said Jim Dreusicke, co-owner of Toyota Iowa City and ABRA Auto Body and Glass.

Staff with the nonprofit said a donation like this is special in more ways than one. Medea-Peters said it gives her hope and faith in the community that believes in the survivors and the work they do.

Read 551 times
More in this category: « Ford Warriors in Pink and GoRide Health Team Up to Help Patients Veteran Gets Recycled Ride at a MN Body Shop »
back to top