FCA Racing Ahead on Construction of New Detroit Plant 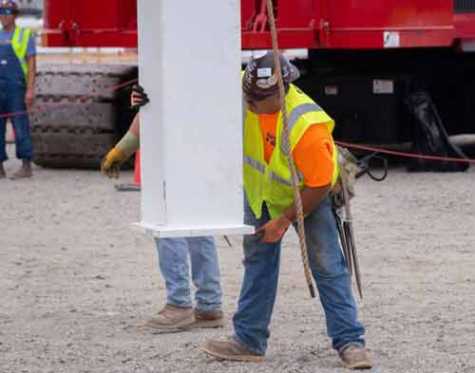 Construction workers help move the first of 299 pieces of steel that will form the structure of the new 800,000-square-foot paint shop. TheDetroitBureau.com

The first steel column in the new paint shop for the new $1.6-billion assembly plant that Fiat Chrysler Automobiles N.V. is building on Detroit’s east side has been put in place, and FCA officials are vowing the factory will be ready to build vehicles by the end of 2020.

The new paint shop is the linchpin of a massive $4.5 billion initiative to remake FCA’s industrial footprint in and around Detroit.

“The is the first of 299 vertical columns,” said the senior manager of for FCA Paint Facilities, who is overseeing the construction of 489,000 square foot building that will house the high-tech paint shop, which will release only one-third of emissions from the 28-year-old FCA Jefferson North Assembly plant next door.

Bob Sabaitis, business agent for Iron Workers Local 25, whose members are working on the building’s steel structure, predicted the vertical column will go up quickly. “When you come by in a week you will see a lot of them,” he told reporters touring the muddy site.

“This is an exciting project because of the accelerated schedule,” noted Eric Goedtel, senior project manager for FCA Building Group, which is responsible for the project.

The new plant’s body shop and assembly unit will be housed in what was once a complex of two separate factories, covering more than 1.6 million square feet that once built engines for FCA. One plant closed in 2012 but the second plant was in operation right up until June.

Both buildings are undergoing extensive renovations as part of the sweeping overhaul of the site, which includes the construction of an enclosed conveyor system to move unfinished vehicles from the body shop to the paint shop and then into the final assembly plant where the interior, engine and wiring, as well as tire and steering gear, are fitted into the vehicle.

View the embedded image gallery online at:
https://www.autobodynews.com/index.php/midwestern/item/18246-fca-racing-ahead-on-construction-of-new-detroit-plant.html#sigProId665a85655f
More in this category: « Summer Internship in MN Expands to Include Automotive Industry Woman Sentenced for Stealing Thousands From Vigo County, IN, Body Shop »
back to top