List of Where the Largest Hail Fell in Minnesota on Aug. 5

Written by Joe Nelson, Bring Me The News 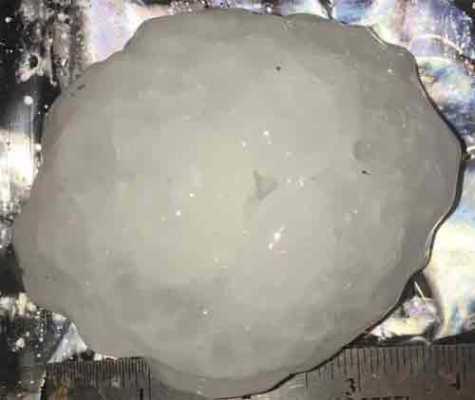 By now you're aware that locations in and around Minnesota were hammered with large hail during a bout of severe weather Monday, Aug. 5, but now we have a list of where the largest hailstones were reported.

The biggest was the grapefruit-sized stones that dropped from a severe thunderstorm in Delano, MN, as shown in the photo above.

Those four-inch balls of ice were reported around Delano, where three-inch hailstones also dropped from the sky.

Here's the list of where the largest stones fell, from Watertown, MN, to Delano and up through the northern suburbs of the metro. Do note that the biggest hail fell in isolated locations, so if you live in Brooklyn Park, for example, and didn't get three-inch hail, that's completely normal.

There were large trees uprooted and reports of tree damage in Savage, Burnsville and Hampton in the south metro, and a barn damaged by high winds in a rural area northwest of Albert Lea.

No tornadoes touched down, but there were a couple of funnel clouds reported near St. Charles and Blooming Prairie in southeast Minnesota.

We thank Bring Me The News for reprint permission.