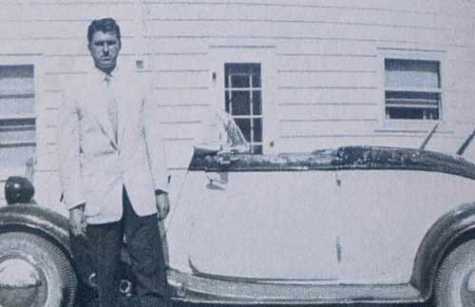 Jim Graham drove this 1935 Ford coupe to his prom after making extensive modifications to it with a friend. It is now one of many vehicles in Graham's collection that is going up for auction. The Forum

A lot of people dream of restoring or buying a classic car. Maybe it is a pickup from your high school era or a convertible your dad had as a young father.

But one bachelor farmer who lived near Wheaton, MI, about 30 miles south of Wahpeton, ND, took that dream to the next level, with a massive collection of hundreds of classic cars.

Jim Graham, who recently passed away at 88, left behind quite the collection of more than 250 cars he had accumulated over the years. At one point the collection numbered around 500 vehicles, which he housed in sheds across from his farm.

“He was a bachelor and I suppose he probably just got into a hobby and (had) nobody to shut him down on it, like a spouse would normally, you know,” said longtime friend Richard Serocki.

Now the vehicles he leaves behind will be sold in a two-day auction on Aug. 9 and 10.

Cars in the collection include a 1959 Impala — a one-year-only design — and 75 convertibles, and they’re getting attention from bidders registered online from 30 states and 21 countries.

Graham even had a collection of tractors, but the focus was on cars: Cadillacs, Buicks, Plymouths, Hudsons, Fords, Model As and collector pickups.

The collection presents quite a picture of American automotive history. One depression-era vehicle has a “Roosevelt for President” campaign sticker on both sides.

For the last few months, a group of Graham’s friends from Wheaton has been fine-tuning and tweaking the cars in preparation for the big sale.

They describe Graham as a unique man, a military veteran who came home to farm after serving.

The long-time collector also had a wild side.

“He liked pull tabs, drinking and raising hell, is what I was told,” said Yvette Vanderbrink with VanDerBrink Auctions, which is handling the sales.

Graham’s love of cars started with his 1934 Ford coupe. He and a friend used a chisel to remove the roof, laid a little fiberglass down and installed a plastic windshield from a speed boat. Graham drove the car to prom.

Previous Page Continue reading »
Read 1621 times
More in this category: « Postal Service Decision Could Mean Thousands of Jobs in MI and Ohio Longtime Auto Body Instructor to Retire From NPCC »
back to top