Ford to Invest $50 Million in Its Chicago Operations, Create 450 Jobs 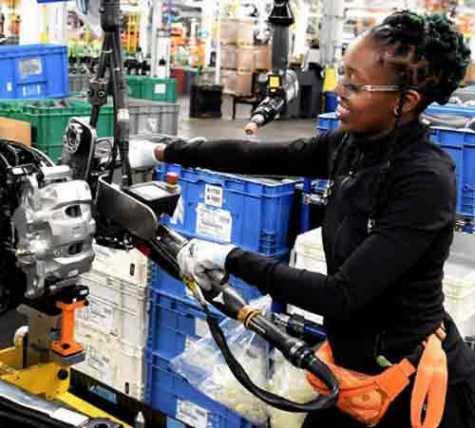 Ford Motor Co. is planning to invest another $50 million in its Chicago operations to fund the new models of its popular Explorer SUVs, on top of a previously announced $1 billion upgrade of its Chicago assembly and stamping factories.

Ford plans to convert 450 temporary employees from its Chicago Assembly and Chicago Stamping plants to full-time employees at a new facility less than a mile away from those plants, Joe Hinrichs, Ford president of automotive, told The Detroit News on Monday, July 22.

The Dearborn, MI, based company plans to transform a 200,000-square-foot Ford "modification center" into a "mini line" that would handle final assembly of the hybrid variants of the Ford Explorer and Lincoln Aviator, as well as the hybrid police interceptor SUV.

Hinrichs said the change would allow the main lines in Chicago to produce more internal combustion engine models of those products, add capacity and help Ford meet demand for the top-selling vehicles.

Ford expects to finish the mini line conversion by the end of the year. It also plans to hire temporary workers at the other Chicago facilities to replace those hired for full-time work at the new facility.

Earlier this year, Ford said it was investing $1 billion in its Chicago plants and adding 500 jobs to expand capacity for the production of the Ford Explorer, Explorer Hybrid, Police Interceptor Utility and Lincoln Aviator.

Ford said it recently replaced outdated machines with advanced manufacturing technology – including two 3D printers at the plant and adding 600 new robots. The company rebuilt the body shop, updated the paint shop and modified nearly every operator workstation in the final assembly area.

Ford’s investment comes as part of its 2015 contract negotiations with the United Auto Workers.

The contract included a pledge by the company that it would invest $900 million at Chicago Assembly.

We thank the Chicago Business Journal for reprint permission.