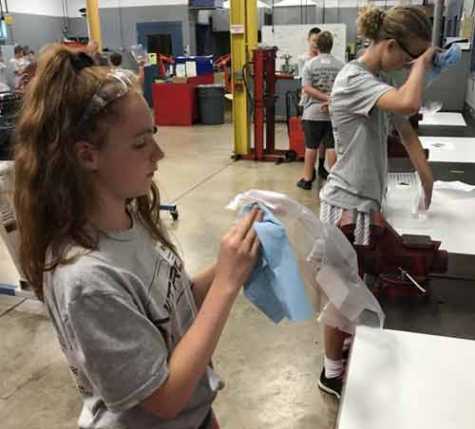 Myah Casey will have you know that she did not crash the car—she merely rolled it over.

“They’re fun to drive, but it’s tough to get used to it,” said Casey, a seventh-grader from G-E-T Middle School in Galesville, WI, and one of 16 students participating in the inaugural Nitro-X Summer Camp at Western Technical College in La Crosse, WI.

The weeklong camp gives students hands-on experience with real-life cars and trucks, as well as the opportunity to customize and race remote-controlled cars, like the one Casey lost control of.

Modeled after similar programs at Minnesota technical colleges, the camp is intended to help students build a foundation of mechanical knowledge — a good thing to have whether they make cars their career, Western instructors said.

“Maybe they’ll find something they like and make a career out of it, or maybe not,” said Andy Olson, an automotive technician instructor and one of the camp supervisors. “They’ll still realize these opportunities and careers are out there, and that they can use these skills in the future.”

While students have plenty of time to race, wreck and repair their remote-controlled cars, the camp is not all fun and games.

The group is scheduled to tour several local body shops and car and truck dealerships, so they can learn about everything from electrical work to collision repair.

Western instructors are giving the students crash courses, too, teaching them how to remove lugnuts and apply nice, even coats of paint.

“There’s really no other summer camp like this,” Olson said. “You have sports camps and typical outdoor adventure camps, but is there anything that deals with mechanical skills?”

It’s been two days, he said, “and I’ve already seen a huge difference with their confidence level.”

They started with varying degrees of experience.

Some grew up with oil on their hands, helping their parents fix cars, trucks and four-wheelers.

Some have graveyards of broken remote-controlled cars in their bedroom.

And some went into the camp more or less blind, but eager.