Council to Sell off Properties, Hears Concerns on Body Shop 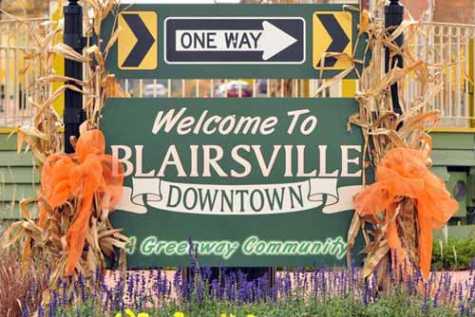 Blairsville Borough has arrived with a recent campaign to rid the town of blighted buildings, considered eyesores and dangers to the public. Tom Peel / Indiana Gazette

For sale: A gaping hole in the downtown Blairsville, IN, streetscape.

This is where Blairsville Borough has arrived with a recent campaign to rid the town of blighted buildings, considered eyesores and dangers to the public.

The leveled lot on East Market Street, where the Walker Building once stood, is being put up for sale, as is a now-grassy residential lot at 276 Morewood Ave.

The borough bought both properties at auction and paid more than $260,000 to have the structures demolished. The borough council voted to advertise the lots for sale with hopes of returning them to the private sector and the tax rolls.

At the same time, the council approved a contract with Smartnick Farms Contracting and Excavating of Blairsville to tear down a crumbling house along North Liberty Street that the borough acquired this spring for $866.50.

Smartnick will be paid $4,800 for demolition, the lowest of three quotes that Borough Manager Tim Evans received from area contractors.

Council members were alarmed at reports from residents Deborah Starry and Josie Bernabei, of Decker Avenue, who said the operators of a new auto collision center on their street apparently are doing a thriving business — but bothering neighbors with outdoor painting and sandblasting that sends clouds of dust onto nearby homes, and with noisy repair work that disturbs their families late at night and on weekends.

Council in May granted preliminary approval for the business to open as a non-conforming use of a former commercial structure situated in the midst of a residential zone.

“I’m begging you to please reconsider allowing this business to come here,” Starry pleaded with the council after describing how the body shop imposes on the neighborhood. “It’s a dirty business, it’s a loud business and it’s a business that’s unbecoming to our property values.”

Bernabei said the employees sometimes work on vehicles that are parked partway on Decker Avenue, and that she has been forced to detour around the shop to reach her home.

A representative of the business this morning acknowledged that the shop recently has been exceptionally busy as workers stayed late to meet a deadline on a difficult project.

“I’m not going to lie; we had a car for a guy who has to have it done and is leaving today,” Aidan Barton said. “We had an agreement on it and it was not in our plans. So yeah, we did work late. It’s not going to be an all-the-time thing. Actually, after today we’ll no longer be doing it. We’ll be done at 5 o’clock and get back to doing what we talked about with the borough a month ago. But we have been full force. I’ve had everyone working on this one vehicle just to get it done.”

Barton said borough manager Evans had earlier approached him about the neighbors’ concerns about the operations, and that he explained to Evans that the project wasn’t going as planned.

“There were times that we had to use the air tools when we stayed late, and yeah, it was a lot louder than I wanted it to be the last month,” Barton said. Although workers came in early, they never used pneumatic equipment before 9 a.m.

Barton said he is as ready as everyone for business to return to normal.

At the council meeting, Evans agreed with the neighbors that the late hours were in conflict with the conditions that the planning commission and council had allowed.

“Some of the things they are doing are violating what we said they tentatively could do. They promised to go nine to five Monday through Friday and occasionally on weekends.

That’s what their business plan shows,” Evans said. “We can stop them tomorrow.”

“They’re not following the guidelines we set for them,” Borough Council President John Bertolino said.

We thank The Indiana Gazette for reprint permission.

Read 585 times
More in this category: « Reliable Ride and Donated to the Carless CARSTAR Honors Contributions of Franchise Partners »
back to top