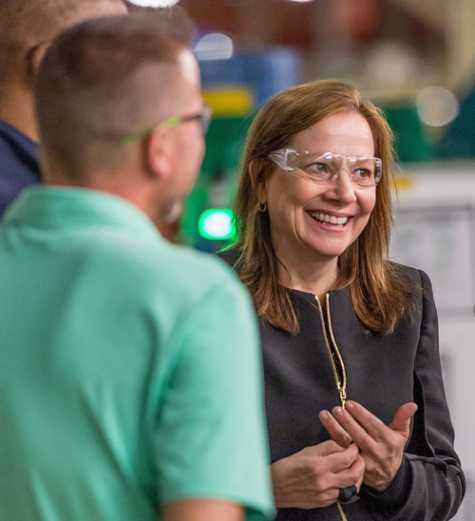 General Motors Chairman and CEO Mary Barra meets with plant employees at the GM Fort Wayne Assembly plant Thursday, May 30, 2019 before announcing the company is investing $24 million in the plant to expand production of full size Chevrolet Silverado 1500 and GMC Sierra 1500 pickups in Roanoke, IN. Shane Pequignot for General Motors

General Motors Co. (GM) is making a new round of upgrades to its Fort Wayne, IN, Assembly plant to further increase production of the all-new Chevrolet Silverado 1500 and GMC Sierra 1500 pickups—especially crew cab models.

“We are building Chevrolet and GMC crew cab pickups at record volume and mix levels to meet customer demand and the $24 million investment will allow us to build even more,” said Mary Barra, GM chairman and CEO. “The team here at Fort Wayne has done an outstanding job helping us satisfy customers throughout this launch. Our product ramp-up was very smooth and the quality has been exceptional. Crew cab sales have been very strong, and we are expanding customer choice with new models, more cab choices and innovative new powertrains.”

Combined sales of the Chevrolet Silverado 1500 and GMC Sierra 1500 crew cab pickups, which launched in the second half of 2018, were up 20 percent in the first quarter of 2019 versus a year ago. GM is projecting another significant increase for the second quarter. Customer deliveries of the double-cab models built in Fort Wayne began during the first quarter.

The $24 million will be invested to further enhance the plant’s conveyors and other tooling to support the increased production. The work will be completed this summer. GM has invested more than $1.2 billion in the plant since 2015.

Since 2009, GM has invested $23 billion in U.S. manufacturing—more than one-quarter of every dollar spent by automakers.